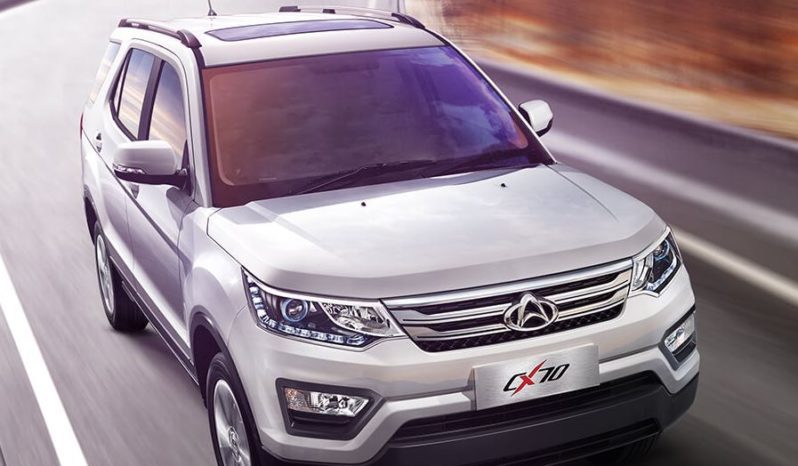 Changan Motors signed an agreement with Master Motors Pakistan back in June, 2018. According to the agreement Changan will bring Chinese automotive vehicles into Pakistan’s market and sell them via Master Motors. The same Master Motors is responsible for selling United Bravo (Chinese Zotye) in Pakistan successfully. Therefore the Changan will be launching plenty of vehicles in upcoming months. One of most discussed and anticipated vehicle from Changan is the Changan CX70 SUV that will be launched in Pakistan. The CX70 was displayed in Asia Expo 2018, held in Lahore along with Pakistan Automobile Expo held recently in Karachi. Therefore just like other new manufacturers setting foot in market, Changan is ready to launch its 7-seater SUV in Pakistan market very soon.

What’s on the exterior?

A cheap Range Rover is what comes into mind with first sight of Changan CX70. The front grille, headlamps and even front end looks like homework copied from Range Rover. But it’s not bad since the CX70 actually looks good in it as compared to odd shaped Chinese vehicles. So the exterior of CX70 is decent enough to stand out on road. 17-inches wheels, overall proportions being attractive and rugged body cladding made of plastic gives a tough imposing look to Changan CX70.

Talk about inside, the interior is remarkably good even when compared to other big brands. Fortunately enough Changan has been doing excellent work in exterior interior styling for the past years to make a point about Chinese manufactured vehicles. From one inch to another the interior is decently crafted and put together. The dashboard is inspired in baroque styling just like Hyundai Genesis models, giving the CX70 an ultimate sophistication inside the room. The straight lines going upside down from driver side to all over the dashboard gives it solid look. Touchscreen is mounted in middle with controls at the bottom, again which adds to the decent look of interior. The dashboard is in black color with silver patch all over it. On the doors it has brown leather same as the seats and center console. This variation in color and neatness almost makes you forget that you are in Chinese vehicle. The legroom and headroom is plenty and the room overall is spacious enough too.

Changan CX70 is powered by 1.5L “Bluecore” turbocharged, direct-injection inline-4 engine. The engine is responsible for turning out 147 Hp from wheels combined with 230 NM of Torque. The engine is mated with 6-speed automatic transmission which shifts smoothly without any difficulties in breathing. On the lower trims there is six-speed manual gearbox available as well. However to my knowledge Changan will be launching only one drivetrain in the CX70 and possibilities of Automatic gearbox seems more obvious. Since the engine is turbocharged, it works well giving out a good throttle response and no problem in drive. The lower gear ratio makes the CX70 drive smoothly in the city in addition to good performance of highway. The Changan CX70 doesn’t struggle in any way while overtaking on high speeds. Now the concern which lies is that many automotive opinion lies that Turbocharged engine might face some difficulties in performance, subjected to bad fuel quality. Many fear that this might turn into the disaster like Honda Civic X Turbocharged in the past. However the Changan and Master Motors don’t seem concerned, also the fuel qualities have improved slightly overall as well.

Entertainment on the wheel:

As for now there are no official prices announced in Pakistan. However in China the Changan CX70 SUV goes for almost 19-20 lacs range. Now we all know that the price in Pakistan will not simply be a conversion from Chinese yuan to Pkr and add shipping. Instead due to taxes and government import policies we don’t know how much should and would it cost. For an estimate let’s just say it will cross the 40 lac mark easily.

Currently Toyota Fortuner is the known competitor for Changan CX70, which again costs 50 lac plus. So if it comes in the right price, people are surely going to appreciate the Changan CX70.