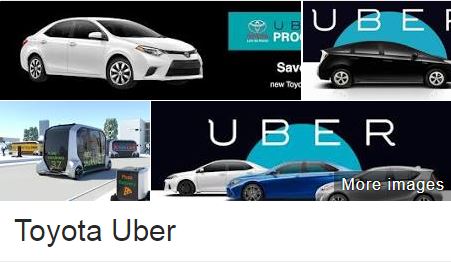 Toyota is among the biggest automobile companies and also have multiple sub brand under it but most of time we didn’t found Toyota in the technology race, This didn’t mean that Toyota isn’t interested in future technology but Toyota plays differently by backing up some big companies in the world and may be well aware of the rule you get what you give.

We all know that Toyota didn’t showed its much interest in autonomous technology but still it is among the leading brands in the race, Recently Toyota invested 500$ Million in UBER’s network and this all have been invested to bring self driving technology in sienna Minivans, as these vehicles are not expected to hit the road before 2021 but still it is a worthy investment, according to UBER these Minivans “will be owned and operated by an agreed upon third party, a new business model” while these will be available through ride sharing network.

Many of the automakers are investing in autonomous driving technology; Apple is also testing and recently caught in a crash, for the first time any of apple vehicle crashed. Google is behind the Waymo that is working with fiat Chrysler and there are expectations that 62,000 minivans of Chrysler may added to fleet in June. Partnership between UBER and Toyota was made in 2016 and this 500$ million investment shows that partnership is progressing well.

“The deal is the first of its kind for UBER, and signals our commitment to bringing world class technologies to the UBER Network”

“Our goal is to deploy the world’s safest self driving cars on the UBER network, and this agreement is another significant step toward making that a reality”

Even this is a significant investment by Toyota there is still a threat by Google which is expected to launch its self driving service before the end of this year.