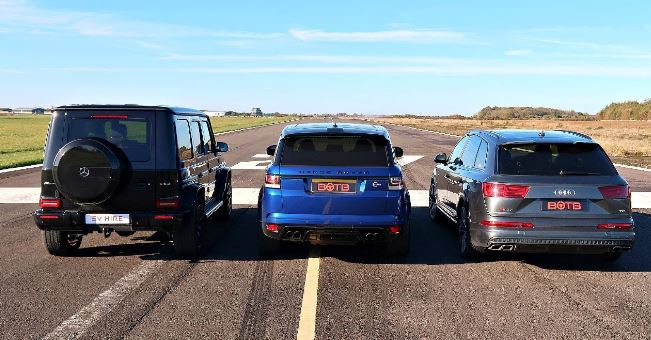 We all know that SUV’S always have great off- road capability and features such as raised-ground clearance and high suspensions available for all four wheels. These cars are mostly used on off roads or for the purpose of racing like drag race, a good example of such cars are Audi SQ7, Range Rover SVR etc.

Recently an amazing drag race has been seen among Mercedes AMG G63, Range Rover SVR and Audi SQ7. Some people may think of Audi SQ7 and Range Rover SVR as winner of this race but the Race was won by Mercedes AMG G-63. This is may be a shocking news for the people as Mercedes AMG G63 looks like a lunch box and is mostly considered as a family car, because it does not takes care of aerodynamics and may be at bottom of the list of sports race lovers.

The concept of Audi SQ7 is also full of controversies; some people think that it is a high performance SUV car while on the other hand there is another contradiction that this diesel- powered off-roader can accelerate faster than any sports car. The engine of Audi SQ7 in this race was enhanced with an electric supercharger as well as by two conventional exhaust gas driven turbos along with three chamber air suspensions, adaptive dampers, rear-wheel steering, 48 electric volt subsystem, conventional 12 volt power supply electromechanical anti roll bars and carbon ceramic brakes and may be with these feature, it can win any race (drag race).

Now the Range Rover SVR is another super car used for racing which has 5 liter supercharged V8 gas engine with 575HP and 516 lb-ft torque that makes it to accelerate 0-60 MPH within 4.3 seconds. Further Performance enhanced with the integration of air vents in carbon fiber hood and the large intake in bumpers to maximize the air flow when using this vehicle at its full potential more it is featured with 21″5 split- spoke “style 5091 alloy wheels with satin polish finish those are light weight as well and It also has an active exhaust system. Because of these feature it is mostly used for racing in drag races and also considered as a super race car.

Last one is Mercedes AMG G63 which is not normally taken as a racing car even though it has all the capabilities to perform better and because of its appearance it is also think like a Lunch box put over the wheels.

But then Mercedes AMG G -63 joined this Race; In the beginning Mercedes AMG G63 was slow but then in the middle of the race it showed  amazing high speed  while generating wonderful torque of 575HP and 627 lb-ft and won the race and showed that who is the king of chess.

Now it may reach at the top of the list of racing car lovers.