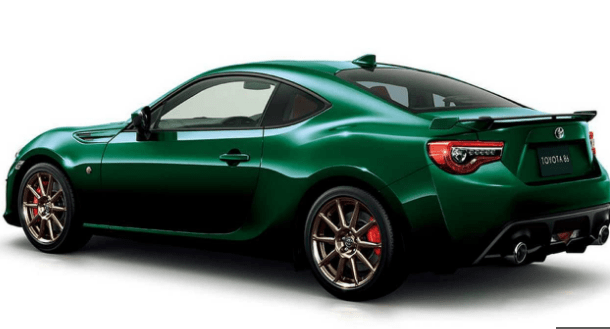 Special Edition vehicles usually own special design cues and features that attract the customers, and most of the time special edition vehicles introduce to honor or tribute historical events.

Toyota 86 a well known name in affordable sports category vehicle which is known with different names including “Toyota FT86, Toyota GT86, Scion RS and Subaru BRZ”, all because this was developed jointly by Toyota and Subaru. This 2×2 coupe is in production since 2012 that was first displayed by Toyota in 2007 during Detroit auto Show.

Toyota is introducing a special edition of this specific car in a beautiful green color that will be on sale until 31st may of this year. This specific green color is not to beautify the car only but basically for giving the honor to classic era of British racing cars. As claimed by Toyota on its Japanese website “Green color is the symbol color of the British cars who won the victory(s) all over the world.” Not from exterior only but from inside as well, Toyota Honor the British Era by using classic Black and tan motif with Two tone leatherette Upholstery.

Toyota 86 was first build with the inspiration from earlier A86 and Historical front engine Rear wheel drive cars of 19’s. Not all around the world but in Japan Toyota 86 surely proved itself as the true carrier of British spirit in reasonable price and that is why Toyota Planned to re-claim its spiritual victory in British racing car section for Japan only.

Toyota is going to introduce this specifically in Japan and not in United States, the reason could be that there are some competitors those are more known for having the spirit of British and may be better than Subaru BRZ or Toyota 86 like Mazda Miata.

No up gradations done to its engine and power but exterior and interior color scheme has been changed completely to pay tribute. 17 inch cast aluminum wheels are fitted with red brembo brake calipers matching with interior of special edition 86.

As it will not be available in united stated but for Japan Toyota has set pricing of this special edition British taste 86 starting from $30,035.