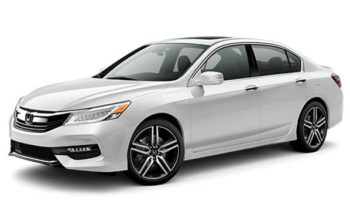 A beautiful sedan car Honda Accord 2016 that designed entirely to attract and impress users with its excellent design, high specifications, and a long list of features. On the front, LED Headlights and LED fog lights increase its beauty to more extent. Having a powerful engine of 2.4 VTI L that produces a high Horsepower of 175 by using its four inline cylinders and gasoline as fuel type is the property of Honda Accord 2016. Automatic transmission, power steering, front center armrest, rear center armrest, navigation/multimedia system are just a few properties of Honda accord from a long list. Watching this car on the road and didn’t wish to buy it can be said as impossible. This not gives a comfortable, secure, and entertaining driver but also increases the personality of users. This Honda accord has other versions, too, that are mentioned below.

Honda Accord was introduced in 2012 worldwide, including Europe and Japan, and it became a popular species with upgraded design and refreshed appearance. Still, unfortunately, it was discontinued in these countries, and only North America continued its production till 2017, and its rollout particularly in North American automobile markets. Honda Atlas Cars Limited Pakistan brought their Accord in 2016 in Pakistan, which was the 9th generation of Honda Accord with refreshing changes and considered one of the best’ midsize sedans’. Bookings for Honda Accord started on 17th December 2016 with a retail price of 11.25 million Pakistani rupees and a two-year warranty. It was available in five colors; silver metallic, brilliant sporty blue, modern steel metallic, crystal black, and white orchid pearl. Honda accord was also launched in the Indian market, and it made a tremendous sale there too. It has been four years since it has been ruling Pakistani automobile markets with its unique features. The latest model of Honda Accord 2019 features an angular design with more terrific refinement and is available in the 2.4 i-VTEC version with 13.75 million Pakistani Rupees. Honda Accord was ranked eighth most affordable midsize car in 2016. 2016 Accord is a good option when purchasing a used midsize sedan because it pleases us with well-balanced handling, increased setting space, quality cabin material, and good features. It is sixteen feet long with a curb weight ranging from 3170 millimeters to 3605 millimeters.

Engine and performance of the car:

Honda Accord possesses 2.4 liters DOHC i-VTEC four cylinders and a sixteen valve engine that generates 175 horsepower at 6200rpm. One of the advanced features introduced in Accord 2016 is the ECON option button that helps the engine make adjustments in the fuel consumption system to improve efficiency. It tells the efficiency of the drivers by highlighting the green bar on either side of the speedometer. It comes with a six-speed manual and continuously varying transmission. Four-cylinder in the engine hustles the vehicle to speed smoothly and swiftly, providing confidence in driving highways. It’s best in its refined handling and comfortable ride even on rough roads. It makes the drive so smooth to turn agilely through corners of streets and precise steering. The braking system is advanced to give comfort in your ride by slowing the car assuredly whenever brakes are applied.

Why should you go for Honda Accord?

Honda Accord can be your pick-up because of the fierce look with refined styling from previous entries of the Accord family. It makes a good reputation because of the luxurious interior with innovative technology. Leather-covered seats provide an elegant and deluxe feel with the option of a ten-way power seat for drivers that means it can be adjusted in ten different ways. It introduces the power button to start and stop the car. It is also equipped with an eight-inch infotainment system with a CD player, USB port, mobile connectivity, and Bluetooth connection. It has been equipped with excellent features like:

Reasons not to buy Honda Accord:

Apart from the latest model in the market, which is more improved and advanced, taking into account the features and looks, more reasons should be noticed before buying Honda Accord. Some of the critics cited that this vehicle is not so engaging while you are driving. It lacks the final punch in satisfying the driver’s whims, and the four-cylinder engine does not match the power of the V6. The touch screen control is quite complex, and the standard head unit is equipped with manual physical control that is intuitive. The cargo capacity decreases when you move ahead between car wheelhouses and limits the load flexibility. The maintenance of the car costs you a lot, and the resale value is just average.

Honda Accord 2019 features with 2.4 i-VTEC sixteen valves inline engine with manual and automatic transmission giving a mileage of ten kilometers per liter. It provides front-wheel drive fun with a new angular design and portioned design language. The car’s interior is more luxurious with leather covering, eight airbags, satellite navigation, parking sensors, folding mirrors, multifunction steering, rain-sensing wipers on the windscreen, six speakers, and a subwoofer. It provides a high level of comfort and refinement because of many driving aids and luxurious interiors. All these features come with a price range of 13.75 million Pakistani rupees. Now coming to the point of whether you should go for a new or used model, then we should know that though the 2019 model is the more advanced model, the 2016 model was declared model of the year because the new models did not notice any significant changes in its features and the price tag was increased so high in the latest models. It has average reliability getting three scores out of five-star rating from J.D power.

Honda has introduced many latest models provided with improved features, but the 2016 model is neither old in its features and specifications, giving excellent safety scores and high fuel economy estimation. It fulfills all niches in today’s vehicle market and makes it popular among the public. If you are looking for a midsize sedan, then you will love the Honda Accord 2016, and it deserves to earn a top place on your VIP, luxurious, midsize Sedan class.