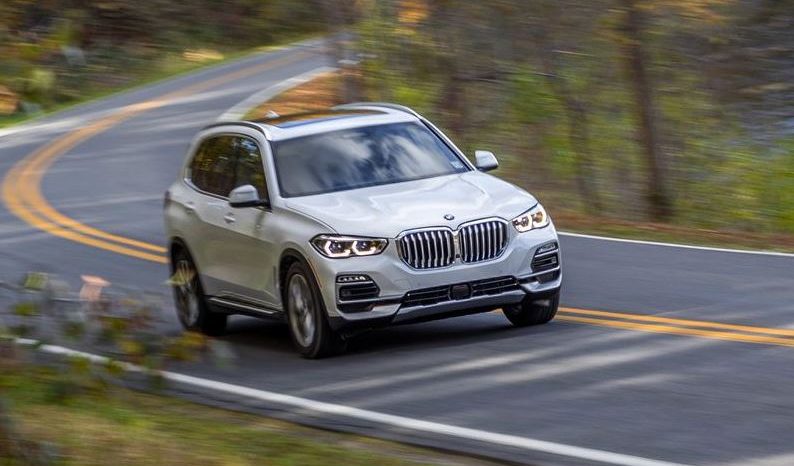 BMW X5 series was known for its sporty driving experience that maintains a balance in providing power, luxury and refinement among mid-size SUVs and available in three trim levels while this year brings you many changes in X5 lineup introducing another trim: M50i and smartphone compatibility is also introduced in all trim levels giving the entertainment of your choice. X5 xDrive is also available to make your rides more thrilling and fun while a plug in hybrid model is also expected to be launched in next year which will be having more efficient budget friendly fuel economy. The 2020 models of BMW X5 is definitely a powerful sporty SUV to be equipped with luxurious and comfortable cabin  declaring it on number 3 among other midsize luxury SUVs.

SDrive40i and Xdrive40i are the base trims of X5 series that features all-wheel driving facility as standard and charged by three liters 6 cylinder engine while the xDrive50i is powered by 4.4 liters V8 engine upgraded with heated front seats, sixteen speakers audio system and 4 zone climate control system. The M50i trim has similar powertrain as XDrive50I but it features more powerful and bigger brakes along with improved suspension with differential tuning. Among all trims the XDrive40i has most buyers as they found it most affordable and satisfying thus we will be discussing its features in detail.

2020 BMW XDrive40i gets its power from a 3 liters inline 6 cylinder turbocharged engine producing a horsepower of 335 hp at 5500 rpm and torque of 330 pounds feet. Its engine is quite strong and responsive giving you option of eight speed automatic transmission shifting gears smoothly and quickly.

The off road driving feature can be selected to make your drive on trails and uneven roads more comfortably while the handling and steering response of XDrive40i are very impressive giving you thrilling driving experience. It gives you a quick acceleration running sixty miles per hour in 4.9 seconds. While talking about the real world fuel economy of XDrive40i it must be mentioned it matches with the EPA estimates giving you a range of 23 miles per gallon in city and 28 miles per gallon on highways. It rides with adaptive dampers suspension running all four wheels independently and M Sport package upgrades the suspension to more sporty level with more tuned performance.

The overall design of 2020 X5 is not much changed but launched with minor restyling introducing enlarged air in takes on front drawing air inside offset by buck teeth styled grille on front accompanied by jewel eye shaped LED headlights given with daytime running lights to make your pathways more clear. It features 2 piece tailgate traditional BMW design and aluminum exterior trims looks stunningly beautiful enhanced a little more with black colored wheel arches while M sport package can make the wheel arch as the same color of the body.

The cabin defines luxury to the next level giving you synthetic leather covered seats and steering wheel, fine metallic trims and glossy open pore wooden trims in the cabin giving it a deluxe layout. It can accommodate four adults comfortably providing you more spacious cabin with wider and taller dimensions than before. Front seats are eight ways power adjustable given with multi contours and bolsters and cargo space provides 72.3 cubic feet of storage area when rear seats are folding carrying enough amount of luggage with you.