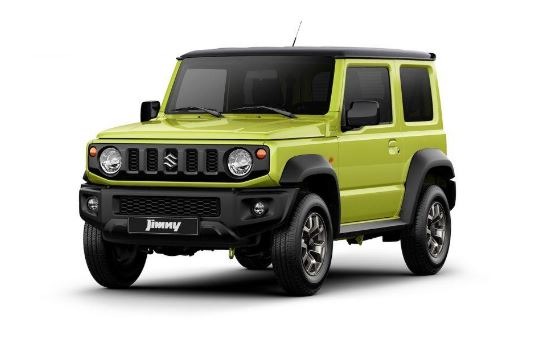 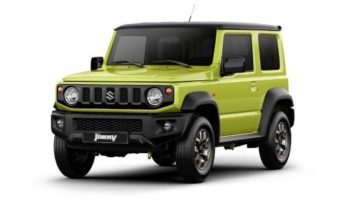 Suzuki Jimny 2019 enables you to go off-road while staying on road within the budget. It’s an antidote to a big heavy crossover SUV and people love it. Especially if you are a 4×4 fan the Suzuki Jimny 2019 is the perfect companion for urban drives off-road adventures and camping on a holiday. Now just before you categorize the Jimny as an SUV vehicle only, mind you that Suzuki Jimny has won the “World Urban Car of the Year 2019” award. There you go and yes you read it right, the Jimny officially won the people and car journalists choice award which means Jimny is your everyday daily driven SUV. As soon as you set eyes on one of these adoring jeeps, an inner voice of ‘Want One’ will haunt us forever. The Suzuki Jimny 2019 is cuter than Jeep Renegade but as sturdy as the Mercedes G-class, thus the Jimny is a desirable vehicle.

The last-gen Jimny was sold for 20 years straight. The newer model was announced in 2018. Underneath the Jimny is based on steel platform like old times but upgraded to stronger, the newer foundation for 2018 and above models. The front and rear axles are stiffer with separate differentials and four-cylinder petrol engines making 100bhp and 130 NM and 75Kw of torque. The engine is placed as 1.5L mated with a choice of 5-speed manual or 4-speed automatic transmission. 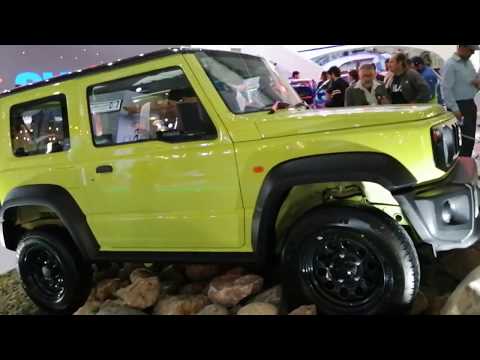 What’s new in the 4th Generation?

The newer Suzuki Jimny 2019 is 30mm shorter, 45mm wider and 20mm taller than the predecessor. Why? Because it gives cabin space and better off-road articulation. A Wipe-down interior with hill-descent control includes the package too. The boxy shape like a mini-sibling of G-Class Mercedes is what the Suzuki Jimny 2019 looks like. Therefore if you are a fan of flat roofs, good looks, and ultimate drive it anywhere experiences, you’ll love Suzuki Jimny 2019 just like the rest of the world. 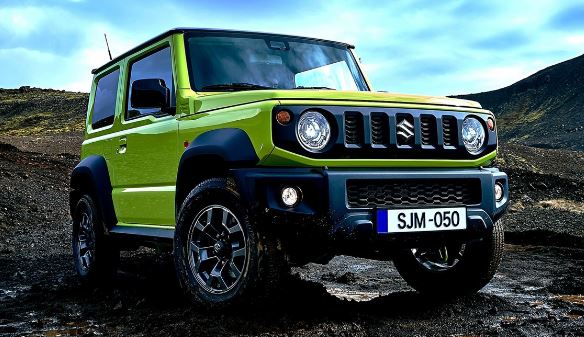 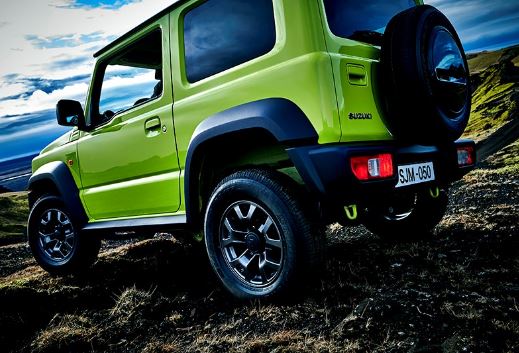 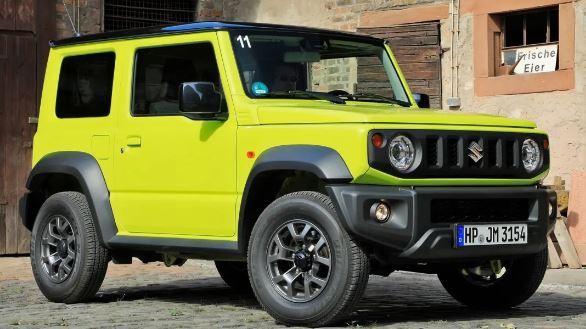 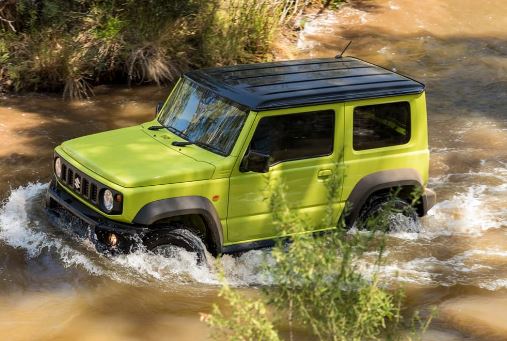 Take it easy! The Jimny is not a fast vehicle to drive. While it’s a tall phone booth with wheels shrunken in a two-and-a-quarter meter of space. The steering is slow and vague in extreme driving conditions, but then the car is also lightweight. The Jimny lets you learn to drive it on the reverse grip but the front grip is always present even when you don’t feel like it. Thus the Jimny handles well in normal drives.

Does it rollover? Yes, Simon, it does when you push it off the limits just like everything else. The 1.5L engine with 100bhp doesn’t help you in getting off the line that much since it will accelerate slowly above 70 mph. But then the Suzuki has done a great job with the Jimny shifting into gears lightly and pleasantly in terms of mechanics. The flat-looking windscreen is curved masterly to avoid noise from the wind thus the drive is quite as well. Hill assist and traction control work on a single button press, with less drama and more practical ideology. The trailer is easy to tow and the boxier shape gives plenty of visibility at the back. The low-range gearbox climbs the mountains and off-road patches of 38-degree effortlessly which means the Suzuki Jimny 2019 can climb up and down ponds & mud in seconds. With all this adventure, the drive-in city is excellent. Remember Jimny has won the Urban Car of the year 2019 award for a reason before you doubt it’s driving in the city. However there are no backup warning cameras or parking sensors so take care of the back-mounted spare wheel and try not to bang it up in the wall before you get the chance to put it where it belongs, the axle. 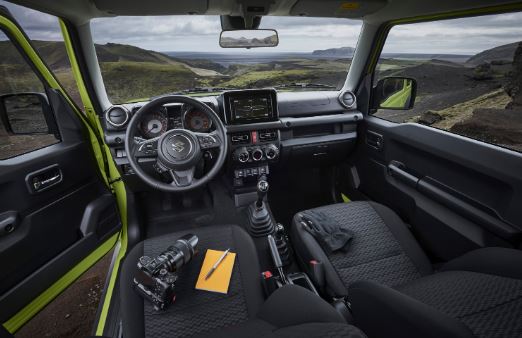 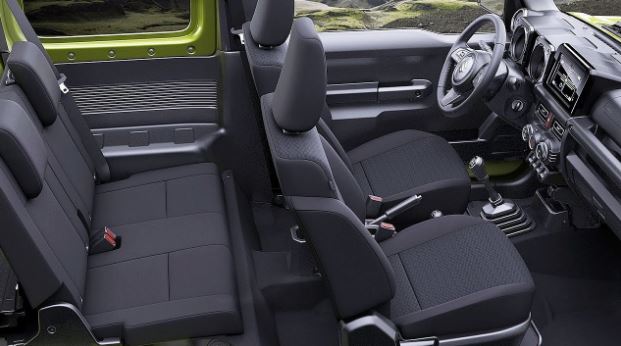 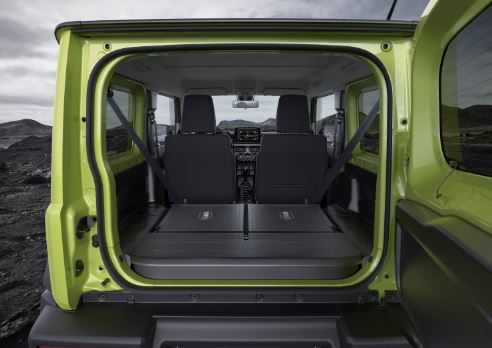 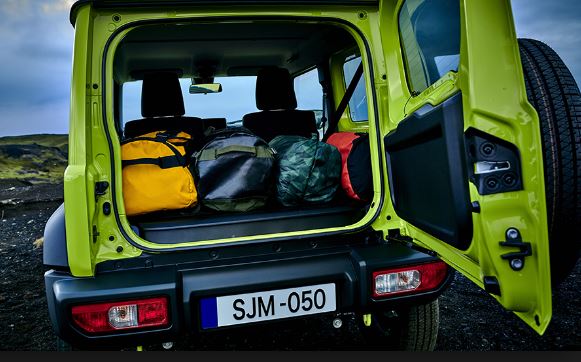 What’s in the Box?

By box I obviously mean Jimny. It’s simple and compact as it should be. We don’t mind the cliff-face dashboard with hard plastic, as hard as it should be. So hang something as heavier as you want to from your daily takeaway meals to camping equipment, the Jimny doesn’t mind.  The front clocks are engrafted with simple dials and a multi-function computer. The touchscreen is from Vitara and Swift for higher models. Overall the interior feels just like it should be.

Suzuki Jimny 2021 costs around 45 Lacks Pakistani Rupees. Suzuki Jimny is not your sophisticated SUV dressed in a suit, rather it’s more practical and subtle in looks and drives.