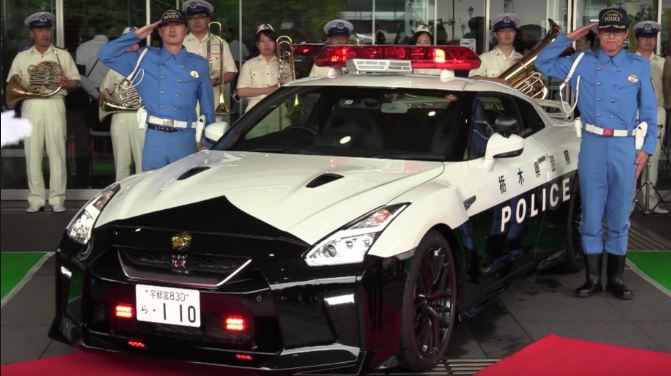 Dubai is not the only country where high power, high performance and expensive vehicles are under use of their law enforcement department but many other countries also have. Nissan a Japanese company that has well known history for the production of high end sports cars also have history of well doing for its home country. Nissan built many cars for Japanese police and from the long time Nissan is doing this, some of custom built cars by Nissan for Japanese police includes “fairlay ZS”, Silivia Police cars and Many other Skyline models. Custom built vehicles by Nissan for police designed differently and more powerful than same existing models in country.

In 2018 on 50thanniversary of Nissan Tochigi Factory, Nissan gifts a Nissan GTR- R35 2018 to police department of Tochigi from the factory. As mentioned above custom built vehicles for Japanese police usually have more power and speed so does this R-35 because other vehicles of same model sold in Japan has speed limit of 112 Miles per hour while the one gifted to police has no limit.

Country Japan is well known for street racing as many of us had seen “Tokyo Drift Movie” and must be aware of it and for suppressing those reckless drivers this machine will surely help out the law enforcement department.