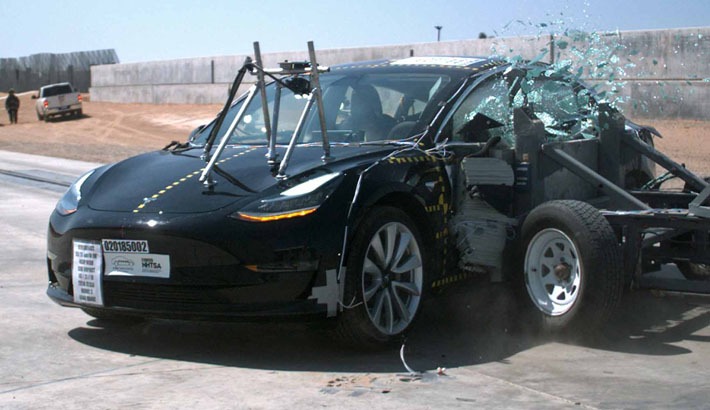 From last 2 months Tesla’s shares are falling with every passing day, first half of the year was great for Tesla but 2nd half is getting worse, in worse days any single good news related to company can become a worthy full for the company.

New model 3 of Tesla is already become the top selling model in Europe while the deliveries to more customers is still in progress, good news for Tesla’s Model 3 owners and Tesla itself is that Model 3 has received 5 stars rating by NHTSA. As per details Model 3 of the Tesla has been proved to be the safest vehicle of the company among the entire vehicles ever tested, previously this record was also in the hands of Tesla with its Models “S” and “X”.

Many companies try to build cars that perform well in crash tests, and every company claims their vehicles are safe. But when a crash happens in a real life, these test results show that if you are driving a Tesla, you have best chance of avoiding serious injuries”

Recently latest software update has also been released by Tesla for all its models including X, S and Model 3 that will help the customers to stay safer on the roads.

As per test details done by NHTSA; “The likelihood of serious bodily injury for front, side and rollover crashes is around 5.7% in new Model 3 while it is more in previous Model S and Model X by 6.4 to 6.5%.

Reasons outlined by Tesla for safety; We have placed the batteries and electric motors as close to ground as possible that gives low center of gravity having the lowest intrusion rates from side pole impacts and efficient front crumple zone designed to decelerate occupants.