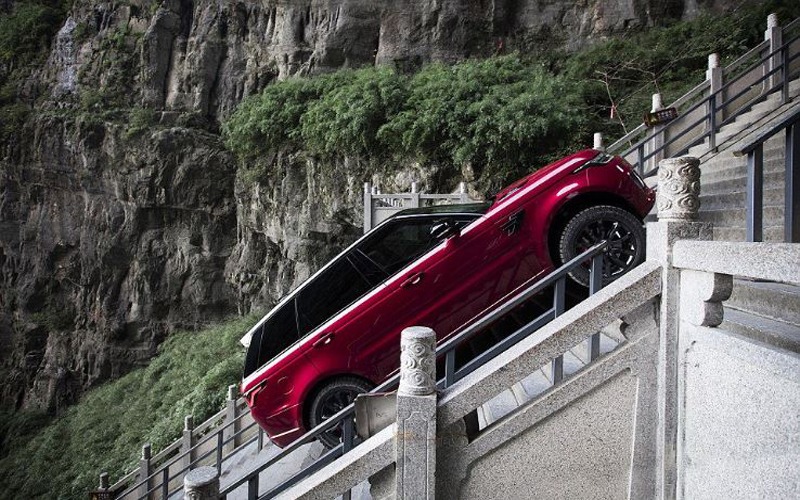 Range Rover SUV’s are generally categorized as “Large Range Luxury SUV”. However for some past years the British SUV manufacturer seems to be extending that category, fitting themselves into an Off-road with extreme conditions. Therefore attracting adventure seekers all around the world along with urban consumers. The company believes in setting bars higher than everyone else by practically proving their vehicle’s ability, time after time. Recently the company demonstrated the reliability and performance of their newer version of SUV. Therefore what better way to do it in extreme Range-Rover style on one of most difficult mountain side roads. So in order to prove the capability and performance of their brand, the challenge took place in Tianmen Mountain Range with 99 pins on a stretch of 11.3 km. The road is driven by especially trained eco-bus drivers only, as each pin requires accuracy and perfection. On the hilltop it reaches to point named “Heaven Gate” with 999 steps between you and what people call a link between mortal world and God’s world. These steps are on 45-degree steep angle, making the Range Rover first ever to attempt this dangerous challenge.

Range Rover choose their new Range Rover Sports Plug-in Hybrid with an astonishing power of 404HP combined with 85kw electric motor and Rang Rover’s modular Si4 ingenium petrol engine to conquer the mountain. Reminded you that no vehicle has ever taken the task to tackle the mountain drive whereas Range Rover aimed to climb the steep steps in addition to mountainous road. As the roads ends with 99 pins, the 999 steps at an angle of 45-degree are no piece of cake to cross.

Read Also: Recreation of the lamborghini countach as a modern super car – 2018 News

Being no room left for errors, the testing and experimenting started back in UK. Eventually the team developed a dummy test model of 45-degree steps after various considerations and calculations that were to be faced in China. However nothing for sure can be tested until it was show time therefore a question mark on vehicle performance was still on the minds of officials. According to the Range Rover’s Experiment and Special Project Expert, this dragon challenge was the hardest challenge in history of challenges attempted by company. Adding further he said I can’t categorically say if we will or not succeed. In simple words it was one of its kind challenge. Range Rover set up Ho-Pin Tung, Le who is winner of Le Mans 24 hour racing along with being a driver for Jaguar Formula E Racing.

Finally it was time for Range Rover to go against the odds and prove the capability, performance and vulnerability. So Ho-Pin arrives in China to set the record in favor of Range Rover as the sun arises to that day. The Range Rover Sports launched itself covering the 99 pins with its superlative aerodynamics and outstanding power easily with an effort completing the half part of challenge. Once the 99 pins of 11.3 km were defeated, it was time for the SUV to sail towards the lowest step, ready to face the next part of challenge that were the 999 vertical steps. It was about time for the SUV to turn on its Mud and Ruts mode enabling itself for extreme off-roading. As it launched towards the brow of first ever vehicle to dare climbing these steps, powered by extremely powerful engine the result still was unclear. Soon the Range Rover Sports vanished into fog and clouds as it began to climb successfully towards the Heaven’s gate. However, just about a time it emerged at the top of steps with rattling engine sound setting up the supremacy of Range Rover over the world vehicles.

Surprisingly enough this beast SUV covered the whole 99 pins on road of 11.3km and 999 vertical steps in just about 22 minutes and 41 seconds which is extremely impressive. Therefore the team Range Rover made sure to celebrate on finishing line with the proud smile and a feeling of success placing themselves above the mountains. Therefore the unmatchable power, maneuverability, skills of the champion driver, efforts from team and most importantly completing the challenge with hybrid power proving the myths about lack of power in hybrids, Range Rover accomplished what they set their eyes on quite easily although it seemed a lot different before the attempt. Hence claiming the tittle of first ever vehicle to climb on Heaven’s Gate.