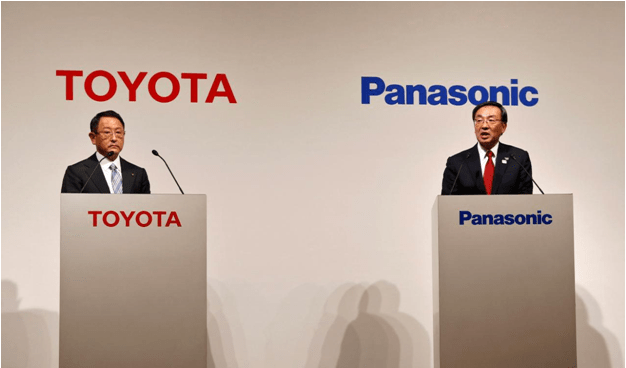 Yamazaki and Tajitsu reported on January 22.

Toyota and Panasonic being the largest automakers and battery makers respectively are distributing each other’s load by launching a battery venture together to make electric vehicle batteries for the expansion of their EV push. The launch is expected next year.

Confirming previous reports, the automaker made a statement on Tuesday according to which 51 percent of the joint venture will be owned by Toyota whereas the rest of the 49 percent will be in the hands of Panasonic.

The aim of Japanese companies is to become even bigger key players of the global market which can be reflected from the fact that the joint venture was initiated between the two companies in late 2017, the initial agreement was a lithium ion battery partnership. For the development of affordable electric vehicles, the unhindered progress of the Japanese companies is vital.

The joint venture will be populated with part of the existing battery related engineers and equipment supplied by the two companies at the same time, the manufacturing capabilities of Panasonic will be transferred to China and Japan for its regular-shaped, thin prismatic batteries. A sum total of around 3500 employees to be precise, will be transferred by the two companies to the venture. Batteries that are going to be produced by the joint venture will be supplied and sold to different automakers all over the world.

According to Toyota and Panasonic, the capital size of the venture has not been decided yet.

Though Panasonic is one of the biggest Electric Vehicle battery suppliers, it is facing an emerging competition in the field by China’s CATL, and South Korean makers LG Chem and Samsung SDI.

Currently, Panasonic is functioning as an exclusive battery cell supplier for Tesla but news press has reported that the automaker has been engaging in discussion with other companies with the inclusion of Tianjin Lishen of China for the supply of batteries for its new car factory in Shanghai.

A joint venture namely Prime Earth Electric Vehicle Energy which manufactures such batteries those are mainly used in gasoline hybrid vehicles is already being operated by Toyota and Panasonic.

The initiation of the new Joint Venture is an indication of Toyota’s expansion into further production and development of Electric Vehicle batteries at the time when numerous auto making rivals are stepping away from further development keeping in view the involvement of heavy costs.

A new era of Electric vehicles is awaiting where electrically powered automotive will be available at affordable costs. If the development continues at the current pace by the companies that do not back away from emerging challenges, we can peep into a great progressive future ahead.