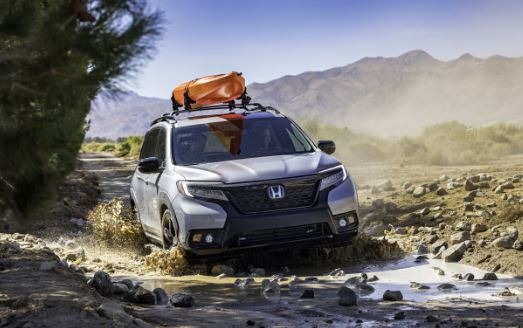 To Target the SUV market Honda come up with Honda Passport, there was not any good SUV under Honda name other than CRV that wasn’t good enough to pick on competition. Passport by Honda falls under luxury Mid Sized SUV’s to beat competitors like ford Edge, Toyota 4runner and many others. This new SUV by Honda will be available from 4 February 2019 with three different variants having 2WD and all wheel Drive Systems.

Read Also: Hyundai Nishat Vehicles Availability in Pakistan – Update – 2019 News
Honda has surely added some good features in the Passport like Leather seats, Power moon roof, heated front seats, Apple car play and Android auto but the price tag announced by company is higher than all base models of its competitors in this category. While 2WD base model of passport starts at 33,035$ and AWD starts as 34,935$.

2019 Honda Passport is a five seated vehicle with roomy interior

Honda Passport the New rival in Off road vehicles segment

All the trims of Honda Passport are equipped with 9 speed automatic transmission with standard engine of V6 having 280 HP. As per rated by company passport gives 20 miles per gallon within city and 25 miles per gallons on highway.

But still if we compare the prices of Honda passport with other higher trims of competitors than it is not expensive though.