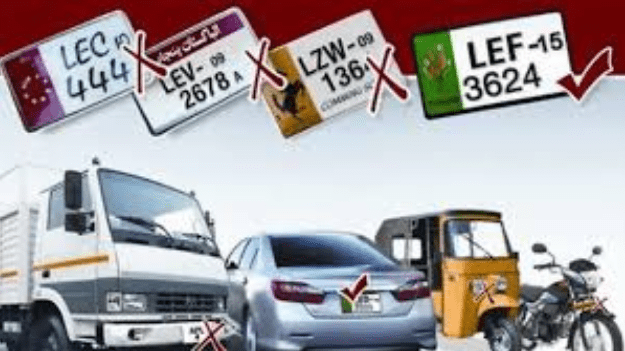 Punjab safe city authority has become quite active these days and taking legal actions against those people who are roaming around on roads with illegal number plates of cars.

Every car is given a different registration number by Excise and Taxation department and it should be computerized and standardized. It has been noticed that people are still using fancy number plates on their cars. One of the extreme disadvantage of such number plates is that it cannot be read by the cameras installed throughout the city. Cameras installed on road can only read the computerized number plates. E challan is sent to the users and entry to motorway is prohibited for such illegal number plate’s users. Recently a crackdown operation is going on for such illegal number plates. A warning letter is issued to the vehicle user for seven days and if the registration plate is still not changed then the vehicle is cracked down by City Traffic Police.

Another strict action has been taken on the blue revolving emergency lights on the cars. Such lights are fitted on vehicles for emergency conditions. These emergency lights were originally used in Germany for the first time in World War 2. The main purpose of such lights was to clear the way for emergency use, to slow down and to warn people coming their way. Such lights are used by ambulances, fire brigade, police and emergency rescuers. It has been noticed that people are using revolving blue lights in their cars for casual use. They are using such lights to decorate their cars and make a confusion with emergency vehicles. These fancy lights are getting so common on roads because no strict action has been made yet on their use. Now City Traffic Police has made laws to crackdown such vehicles. They are issuing a seven day warning letter to such vehicles and if they don’t remove these revolving lights from their cars then their vehicles are banned. So if you have any of such vehicle go and make legal changes in it to be used comfortably on roads.