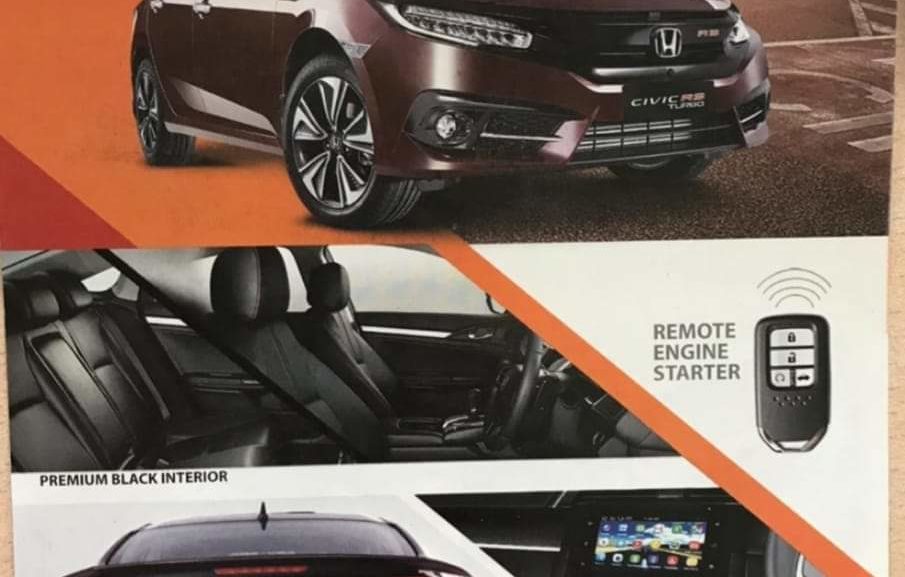 Moving in the middle of year 2019, Honda worldwide is ready to roll out the much due facelift of Honda Civic X otherwise known as the 10th generation. While there is a little bit of difference to be noticed in terms of facelift, Honda Atlas Pakistan is all set to launch the new Civic X facelift with adding “a little more” to the recipe. This means that the Civic X will now be available with couple of features and upgrades added to it in terms of exterior and interior.

Although the official news for launch of facelift will be declared after the 9th of April, sources have confirmed that the Civic X facelift will have an upgraded front bumper. In addition there will be a chrome garnish implanted on the rear bumper as well. However there is so much more to the story than one might imagine.

Quite shortly after the launch of 1.5L turbo variant that was launched with the 1.8L variant back in 2016, Honda Atlas was forced to shut down the turbo variant due to bad fuel quality. There were engine knocking issues and even seizures reported. Although Honda tuned the ECU’s for sold units which made the problem go away (thankfully). It still did shut down the sales for turbo 1.5L variant. However now that fuel quality has seem to be improving Honda has decided to re-launch the Turbo variant of Civic X for all the performance enthusiasts out there. Henceforth the booking for Honda Civic 1.5L Turbo charged has also begun.

Only the Oriel trim gets facelift

Hoping back to the update of Civic X 1.8L variant, according to the details the “Base Model Version” is still going to be identical of what was being offered. Therefore no changes or facelift for the base model version as of now unfortunately. So buyers will get no visual updates of any sort along with the infamous absence of trunk-liner from the back of trunk.

Now let’s say you have decided to pay extra bucks not just for the more options but also for the increased price that comes with the facelift, here is the list of updates done to your ride as compared to the pre-facelift. First and most noticing feature is the new 16-inches wheels that will be now standard of all higher spec trim. In addition the headlamps are now upgraded to LED headlamps accompanied by LED fog lights. Other than that the high spec trim will get chrome engrafted on rear bumper edges and a strip just next to fog light placed horizontally. The high spec version of Civic X is known as the Oriel trim which offers features such as leather seats, android infotainment system, sunroof etc.

Back to the rumors about launch of Turbocharged 1.5L Civic X, Honda has been advertising it on their social media for a week or long now. The sources report that the relaunched turbocharged model will now hit the market with new Engine Control Module (ECM). Apparently it will resolve the issue faced due to low quality fuel however it’s too early to say if we’ll see any upgrades in the performance figures with this new ECM. Also it’s unclear that the recommended fuel grade now will be 91 Ron octane or Honda has planned something higher (probably 95 Ron).

The list is good to be not too short honestly considering Honda is still selling the old gen City. Well the Turbocharged model will get a new Wing spoiler, same chrome as of facelift. However thankfully the wheels will be upgraded to 17-inches alloys. That added with trunk cover and new shark antenna adds more to the car. A lot of rumors for the full digital cluster meter have also been in circulation along with updated new infotainment (because the old one sucks and it’s slow). However I don’t hold much confidence whether or not these updates will include the post facelift models.

Price hike? You guessed it right!

Yes the prices have been increased during the year and previous numerous times however with that being said, expect a huge price rise among the facelift and Turbocharged models as well. Honda is all set to increase the prices again. The Turbocharged variant is expected to reach 3.85 million.