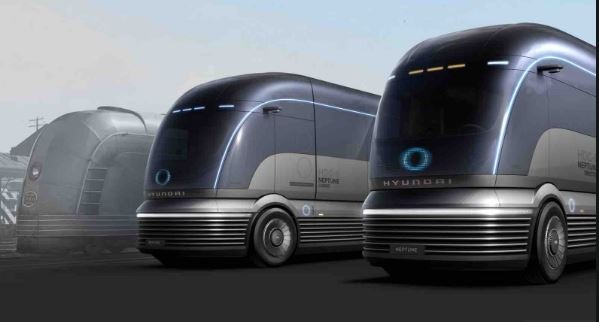 Most of the Big Brands like Toyota and General Motors are planning to re-write the Electric future in the form of Hydrogen and Now Hyundai that has already selling two of its hydrogen fuel cell passenger vehicles in US market is ready to take on Tesla with its semi trucks HDC-6 Neptune.

HDC-6 Neptune concept has been revealed by company during commercial vehicle show in Atlantic in the same week.

“Hyundai already has thousands of its semi-trucks on the roads in US but it does not sell any of its zero emission trucks here. The Neptune could be the first, part of the company’s expansion of its FCEV 2020 vision to the US Market”

“The Neptune wasn’t just made to look Cool”

Hyundai is already selling its fossil fuels semi trucks in more than 100 countries and now zero emission future of Hyundai is about to ready. In the Beginning Hyundai is planning to deliver 1600 Hydrogen powered to a company in Switzerland.

For now these are just concepts but as per details these Neptune’s will use two full cell stacks from Nexo that will be given about 255 horse power.

Fuel cell semi tractors will need about 469 horse powers to be a fully functional.

“By the time this truck is commercialized. We will put a proper sized and proper powered fuel cell system in it so it can perform on part with diesel Trucks, We started with passenger vehicles and we have to use that same system at the moment. “