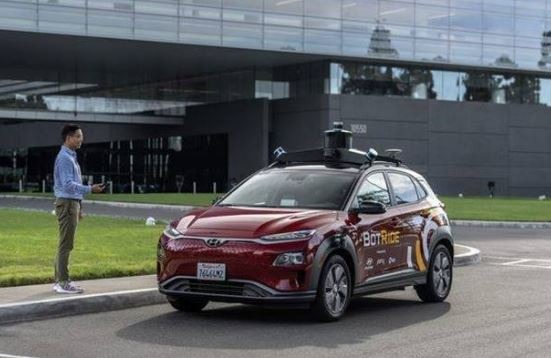 Hyundai Korean Giant Doing lot of progress in new technologies, in 2018 Hyundai was achieved the autonomous level 4 and now in 2019 Hyundai is fully prepared to have its BotRide autonomous vehicles on Road.

On November 4, 2019 Hyundai and its partners including pony.ai and via are ready to demonstrate autonomous electric cars in California via service called BotRide.

According to company hailing of autonomous electric Kona’s will be done directly from Smartphone.

As per further Details:

“Via’s advanced algorithms enable multi riders to share the same vehicle, outfitted with pony.ai autonomous vehicle technology. The app directs passengers to nearby stops for pick up and drop off, allowing for quick and efficient shared trips without lengthy detour, or in convenient fixed routes and schedules.

In addition to self driving capabilities BotRide is validating its user experience in preparations for a fully drive rless future.

BotRide launches with multiple popular destinations where a passenger may hail a ride using the BotRide app. The service area covers several residential, commercial and institutional points of interest. BotRider’s technology prioritizes passenger to system interaction such as automated on board passenger verification, giving riders the chance to familiarize themselves with technologies expected to become common place in an autonomous mobility future.

The pilot introduces BotRide to several hundred Irvine residents, including college students. The goal is to study consumer’s behavior in an autonomous ride sharing environment. We are going to learn about ecosystems, where the vehicles travel and optimize the customer experience. BotRide is another example of Hyundai’s ongoing efforts to actively build expertise in mobility technology as well as company’s commitment to providing more user friendly service to customers.