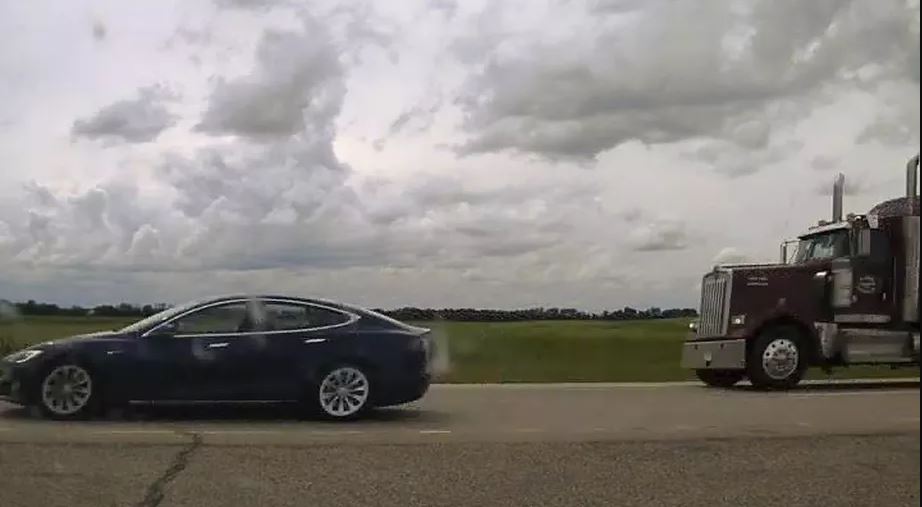 News Related to Tesla is always interested because, with every newly updated vehicle, Tesla brings new technologies that make people interested in testing the cars up to the limits.

This news may be in favour of Tesla despite being taken legal action against the driver. As per reports a man being charged in Canada for dangerous driving at the speed of 150 km/h but more dangerous is that during this dangerous over the speed limit drive Driver was sleeping behind the wheel, this happened near Ponoka in Canada.

According to Tweet by the local police department, Law enforcement was called in action when the car was spotted;

Alberta RCMP received a complaint of a car speeding on Hwy 2 near #Ponoka. The car appeared to be self-driving, travelling over 150 km/h with both front seats completely reclined & occupants appeared to be asleep,” the tweet informed. “The driver received a Dangerous Driving charge & summons for court.”

The person behind the wheel was a 20-year-old youngster and car was above the speed limit.

“Nobody was looking out the windshield to see where the car was going,” Police Sergeant Darrin Turnbull told Canadian public broadcaster CBC”

it is not the first time that Tesla’s drivers been found doing such dangerous activities, in 2018 an incident involves the death of the driver in Tesla while as per details he was playing a game and Tesla was on autopilot mode.

Tesla’s autopilot is not a fully autonomous feature; all offered features in Tesla’s vehicles for autopilot are also available in many other vehicles. Last year Hyundai achieved autonomous level four capability but despite being having all the required capabilities vehicles manufacturers do not provide Autopilot feature, and none of the drivers other than Tesla found in such activities.

In this incident, A Strange behaviour of vehicle also reported According to which;

After the responding officer activated emergency lights on their vehicle, Tesla automatically began to accelerate. The Officer was able to obtain radar readings on the vehicle, confirming that it had automatically accelerated up to exactly 150 km/h.”

Read Also: Tesla Model 3 is the safest car of the Tesla by US Traffic safety administration

Elon Musk the CEO of Tesla has been found many times encouraging Customers to trust the autopilot capability even musk also claimed that technology eradicates human errors. Despite it, if we considered Tesla’s capability beyond the expectations, there is still no law in any country that allows the driver to put their hands away from the steering wheel.