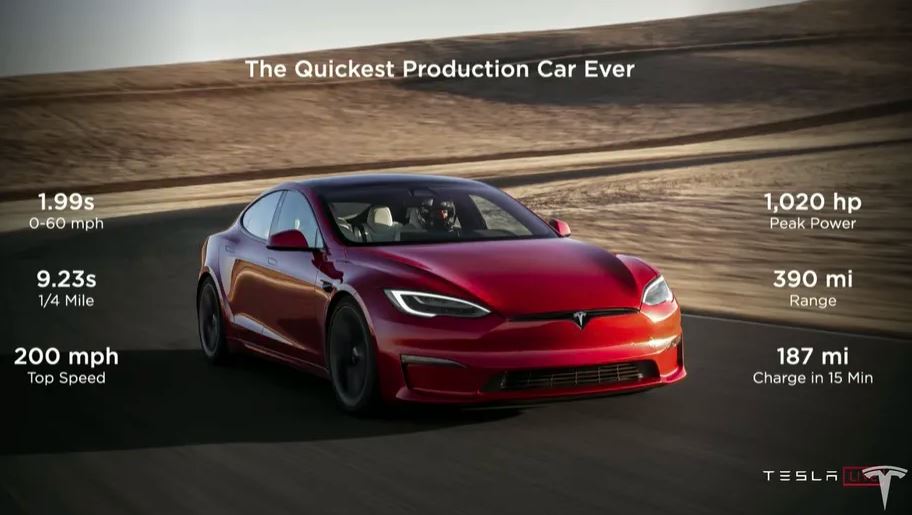 Tesla has finally revealed the revised Model S “Plaid” and gave it to 25 lucky customers during an event held by CEO Elon Musk in Fremont, California, on the night of 10th June 2021. This event was long-awaited and rescheduled to 10th July, in which these lucky customers were announced, and they get their Model S Plaid on Friday night 11th July 2021. According to CEO Elon Musk, this will increase to several hundred cars every week and a thousand automobiles per week in the next quarter.

Why are you making this insanely fast car? Outside Tesla’s factory in Fremont, California, the company’s CEO posed a hypothetical question. He then answered his question in this way: “There is something critical to the future of sustainable energy, and that is that we must demonstrate that an electric automobile is, hands down, the finest car.”

According to Dan Levy, an analyst at Credit Suisse with a neutral rating on Tesla, the new flagship will likely boost deliveries. Still, the high-end S and X models remain a niche company compared to the mass market of Tesla model 3 and Tesla Model Y cars.

The Tesla Model S Plaid accelerates to the quarter-mile in 9.247 seconds, with a trap speed of 152.16 mph. The Bugatti Chiron Sport and Porsche 918 Spyder were beaten to the fastest quarter-mile ever recorded for a production automobile. The Tesla Model S Plaid already has enough marvelous specs for a four-door sedan, with a max speed of 200 mph and 1,020 horsepower.

Elon Musk made a point of mentioning a new heat pump in the Tesla Model S Plaid that has a 30 percent longer cold-weather range and uses 50 percent less energy in extreme cold. This means it can now compete in multiple drag races without dehydrating.

The car’s exterior design was changed to make it more aerodynamic. Inside, the front seats have been pushed forward to provide a way for back passengers, who now have access to a second touch screen. Staggered, performance-oriented wheels and tires help keep the car planted and transfer more power to the road.

The Model S’s interior has received many modifications, some of which have previously been shown, such as a yoke steering wheel, which has raised eyebrows, and soon it will be tested by the National Highway Traffic Safety Administration. The Model S now includes a horizontal touchscreen, similar to the Model 3 and Model Y, but with a big 17-inch display, and another screen is found behind the central console for rear passengers.

The car’s software is meant to learn from the driver’s behavior and adapt to the driver’s needs, so if you, for example, have a habit of backing out of your driveway in a certain way, the car geocodes that position and eventually does that operation for you via the autopilot system.

Musk didn’t comment on Cybertruck and the new battery cells that Tesla is researching in-house or the decision to discontinue the Model S Plaid+, which would have provided more range in this event held for Model S Plaid.