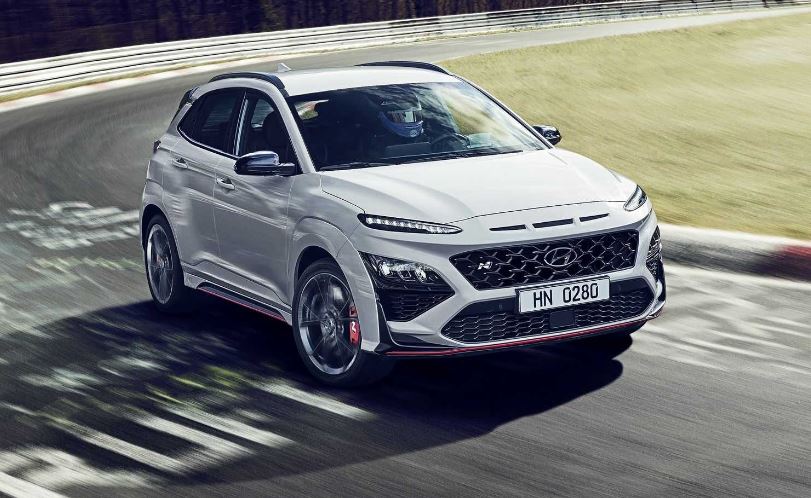 Hyundai has stated that it will offer all-new eighteen performance vehicles by the end of next year, and Kona N will be the one. The Kona N has inherited the custom hardware from Hyundai’s “Veloster N hot hatch”. The boisterous two liters turbocharged engine is paired with Hyundai’s eight-speed wet dual-clutch transmission. The upcoming Kona is part of the Hyundai Kona lineup, which includes several intriguing vehicles. Starting with the standard gas-powered Kona, there’s also a performance-oriented Kona N and a Kona Electric.

It debuted in June 2017 as a five-door subcompact crossover SUV. For the upcoming model year, the Kona receives some improvements and enhancements and the introduction of the performance-oriented Kona N. However, it still belongs to the 1st generation, and the newest generation is not coming soon. The Kona N is not to be confused with the average Kona’s N Line trim level; it is entirely different from the N trim level of Kona. Hyundai teased its new Kona N high-performance SUV in starting months of 2021. The upcoming high-performance Hyundai Kona N recently revealed, and it has everything we wanted in a tiny, fast, and reasonably priced SUV.

The tiny crossover gets a complete makeover to earn the coveted N badge, with a slew of improvements to the design and the engine. A new video uploaded on Youtube by an Asian; shows us the changes in the performance-oriented Hyundai Kona N. Charlie Min starts the video by driving the Kona N on public roads and toggling between the various drive modes and settings. He reviewed the Kona N as comfortable and capable when the driver wants to try something a little sportier. The tiny crossover shines when it comes to the race track, thanks to its stiffer suspension and potent powertrain, which assist drive the model around the circuit.

The N model has several distinct aesthetic features, such as various red highlights that help it stand out. The engine, which Hyundai took from the Veloster N, is the star of the show. The Kona N’s turbocharged 2.0-liter inline-four generates 276 horsepower and 289 pound-feet of torque, making it one of Hyundai’s most powerful SUVs ever.

The basic Kona lineup will be restyled for the 2022 model year. Furthermore, the Kona N is given a sporty makeover with all of the N-Tuned design components, making it stand out from the other Kona models. It also has a sports 19-inch N Design alloy wheel wrapped in Pirelli P-Zero high-performance tires. N Design components with red highlights will found on the rest of the bodywork. The 2022 Hyundai Kona’s interior highlights include Sports seats by N Design, a Leather-wrapped multi-function steering wheel with paddle shifters, and a Shift knob with N Logo leather wrap and blue accent stitching. The Hyundai Kona N has a 10.25-inch central touch screen display for the infotainment system and a 10.25-inch display for the driver’s gauge cluster.

Before the end of this year, the new Hyundai Kona N is said to hit dealerships. Pricing information is still unknown, but it’s estimated to start around $30,000, though it could begin a little more.