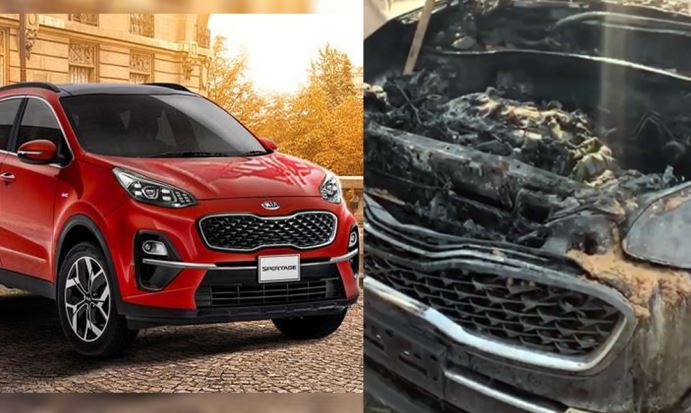 Vehicle fires are not so uncommon throughout the world, and we’ve seen them numerous times here in Pakistan. A lot of such occurrences have occurred in Pakistan over the last few years. The installation of equipment into the car, specifically any electrical component, is the first reason and viewpoint people have following these fires. Some of the fire vehicles were Hyundai Tuscon, Honda Civic 10th Generation, and Kia Sportage—talking specifically about the fire caught in Kia Sportage, which took place In March of 2020. The company issued an 8 points report about the vehicle fire, and the case was closed in Pakistan then.

Hyundai Nishat ordered Tucson owners last month to check for a manufacturing flaw in their cars that might cause the vehicle to catch fire. KIA has now followed the same suit to ask the Kia Sportage owners to check their cars from the dealers all across Pakistan. Product Safety Australia claims that defective cars can burst into flames even when the car is turned off, according to 7news. For example, suppose water enters the system that controls the Anti-lock Braking System, Electronic Stability Control System, and Traction Control System. In that case, it can cause an electrical short-circuit that can put the car on fire, even if it is in the parking.

Lucky Motors issued a notice couple of days back stating that Lucky Motors Corporation Limited is conducting a Special Safety Service Effort relating to the inspection as part of KIA’s global campaign. As a result, to fulfil our promise of assuring policy, we encourage our eligible customers to have their KIA Sportage inspected at one of our 33 Kia authorized dealerships located in nineteen different locations around the country. If necessary, Lucky Motors will replace any malfunctioning HECU fuse kits that can cause a fire. LMCL stated that “We believe in removing potential hazards by acting quickly to ensure the safety and happiness of our loyal customers, “further adding that the inspection and component replacement will be free of charge. Customers can also check if their vehicle is on the list of affected automobiles via an internet website link provided by Kia Lucky Motors. People who have made modifications to the engine may be disqualified from the service, according to the wording “eligible consumers.”

Customers who inquired about whether their vehicle needed to be inspected one of two responses. Those customers whose chassis did not come on the list were requested to call the helpline, and some were invited to visit the dealerships with an appointment so their queries could be solved soon. Thus the customers are given responses either online or at the dealerships because this is something serious, and Lucky Motors deals with this emergency very efficiently so any harm to the public can be avoided.