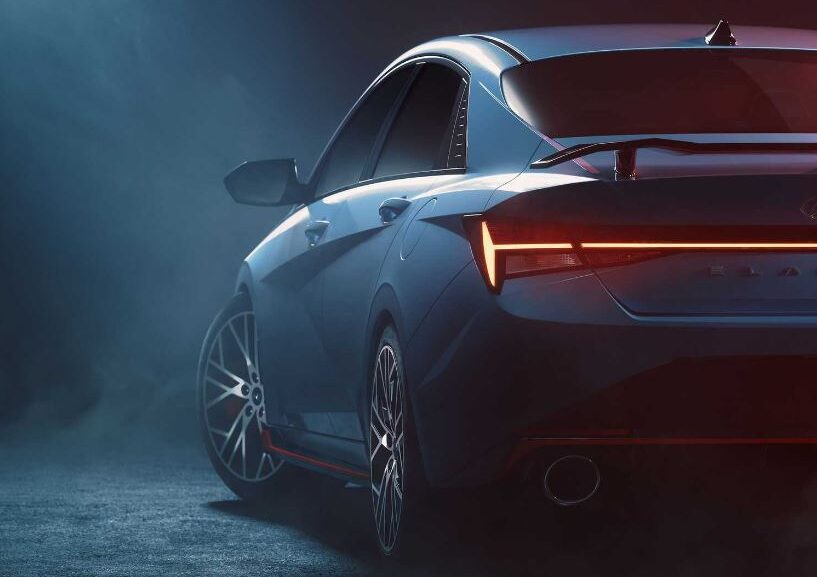 Hyundai revealed the Elantra N for the first time at the end of September 2020, revealing a glimpse of the sports sedan’s external design with a camouflage picture of the prototype. A few YouTubers have even done a test drive of the vehicle in prototype form. A few weeks later, Hyundai released another batch of teaser photographs for the sixth member of the Hyundai N family. Two additional pictures of Hyundai Elantra N are added to the puzzle. These two fresh photographs revealing the prototype of the sporty sedan, it appears like Hyundai is finally prepping us for the upcoming launch of the Elantra N.

These two teasers of Elantra N recently revealed show the Elantra N in Performance Blue with red accents on the side skirts, and rear diffuser, as is traditional for the N division. We can also see that, like other Hyundai N models, the Elantra N also has large-sized circular tailpipes and a unique black-coloured rear spoiler. Hyundai has also shown the Elantra N’s wheels in the teasers, which are considerably different from the i20 N and i30 N’s, and they have crisp silver and black spokes. The Hyundai Elantra N will be driven by a 275 horsepower turbocharged 2.0-litre four-cylinder engine. Customers will have the option of a six-speed manual or an eight-speed dual-clutch transmission.

Hood has improved the airflow channelling in this sedan automobile and made other chassis changes. At the same time, the sedan’s rear spoil airflow has lowered from the back edge. It will be much helpful when driving the 2022 Hyundai Elantra N at high speeds. A dramatic black finish with dual-single exhausts sits behind the rear bumper, which is unique from the original model. A small spoiler is also fitted to the boot lid, which goes well with the LED strip that joins the taillights at the back.

The Elantra N, which will debut in 2022, will be an improved version of the Elantra, which debuted in April. The Hyundai designed this sedan car using the Parametric Dynamics design motif, giving the Elantra N a sporty appearance. “The Elantra N is a high-performance sedan that showcases the sportier side of our great all-new Elantra with exciting N brand improvements,” stated Till Wartenberg, Vice President of N Brand Management and Motorsport Sub-Division of Hyundai Motor Company.

The Elantra N will join Hyundai’s vast list of Elantra models, including the all-new basic Elantra and Elantra hybrids. The Hyundai Elantra N will compete against rivals such as the Honda Civic Type R after it launches in markets. There is no definite debut date revealed. Hyundai, on the other hand, promises to reveal more information on the new Elantra N in the “coming weeks.”