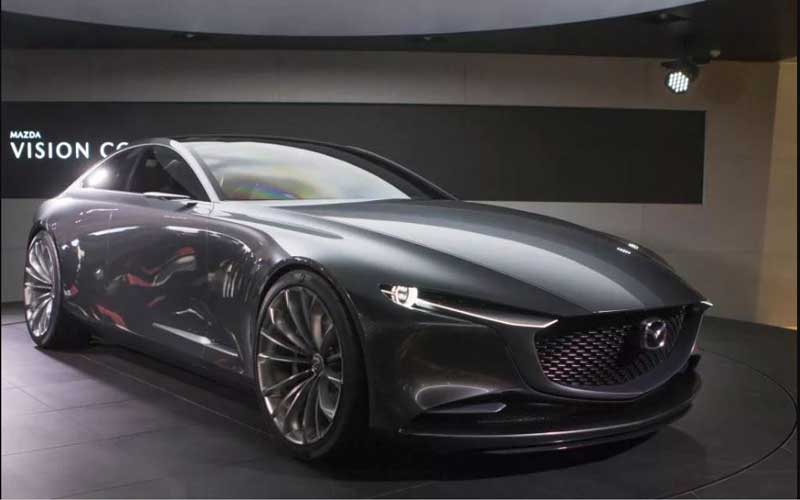 Competitive beauty by Mazda but kept for future release, yes I am talking about Mazda Vision coupe that displayed at Tokyo Motor show 2017. There were expectations that Mazda will display RX9 sports car instead Mazda come up with coupe car based on its new Kodo Design that explained if how Kodo design can be implemented to cars. By watching the vehicle one thing can be said that car has influence of RX vision concept from 2015. Later you can compare photos of RX from 2015 and Vision Coupe from 2017 to know if how many similarities are among these cars. But some similarities that we have noticed includes same long Hood, Hugely Kept rearward stance curving roofline & overhanging front, same car also available with 4 doors.

Body of Mazda Vision coupe has curves that flow all over the body, this curve flow on vehicle makes interplay between light and shadow over the car. As described by Mazda shape of this car is in golden ratio of classic coupe proportion intended to give off an air sportiness and performance. Aerodynamics of car distinguishes from how hood of vehicle indent beyond the grill. Skinny inset narrow headlights on front are more like two door RX version. Rear side of concept vision has 3 dimensional tail lights blobs and convex surface that help forming spoiler, no separate spoiler used but body of car converted to. Below on the rear side it has four exhaust tips again skinny inset.

From inside it is much more gorgeous than expected; leather, wood trim and jewel like analogue instruments being used inside vehicle. Mazda is more intended to provide more natural feeling inside the car. Like many other modern cars Vision Coupe has touch screen infotainment inside but a prominent feature of infotainment screen that not present in other cars is transparency that make this infotainment touch screen to blend with dashboard when not in use. Another great benefit of this infotainment screen is this didn’t divert or block the concentration of driver and display only when required. There are no mechanical details given by Mazda about this vision coupe other than this will be an electric vehicle that will use piston less power terrain.

It will have 6 speed manual transmission in center console and simple three spoke wheel for driver.