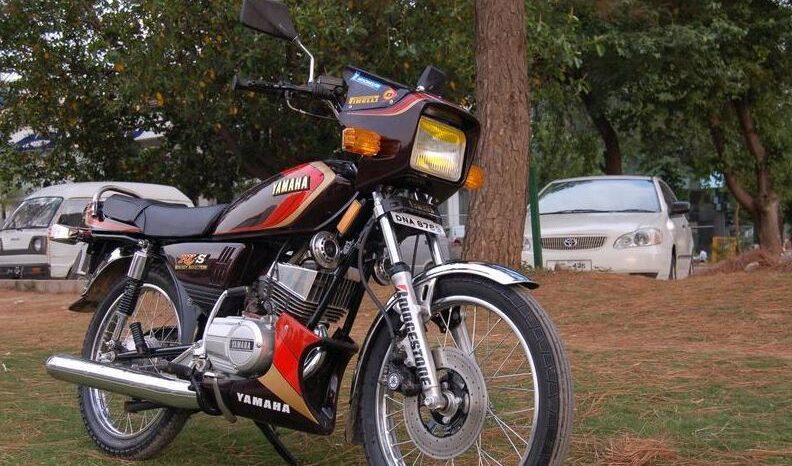 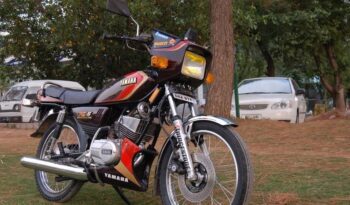 The Yamaha RX115 is one of the most loved bikes by the Yamaha since its launch in 1981. It was sold in Thailand, Turkey, Singapore, Colombia, Uruguay, Bangladesh, Japan, and the United States. It became the most sold motorcycle in Columbia because of its power and speed. The Yamaha RX115 had a stunning white, red, and blue design. It was considered the ultimate king of the road in the early 80s for its striking design. It was a bike with a 2-stroke engine that produced more power to weight ratio. It had an instrument panel that showed a clear display of the speed and fuel average. It was the best-styled bike in its time in Pakistan, but unfortunately, it had discontinued due to several reasons. The Yamaha RX115 showed efficient performance, but some issues were noticed when driven at high speeds. The weight to performance ratio was low, delivering a rough performance as it lifts the bike’s tail, resulting in a loose grip on the road and the main reason for accidents. Another reason for its discontinuation was its 2-stroke engine which was less fuel-efficient, and people preferred to buy the 4-stroke engine instead. It caused a lot of environmental pollution other than consuming more fuel. All these reasons cause a decrease in the Yamaha RX115’s sales, and the company has to discontinue it. It is available in old and 2nd hand conditions, and the price depends on the situation. The demand for RX115 is not high due to the arrival of new technology bikes that are fuel-efficient and safer to ride. It was once loved because of its unmatched speed and agile handling, but its popularity ended because of the high rate of accidents.

The Yamaha RX115 gets its power from a 115cc, 2-stroke engine that generates a 15.2 hp of power at 8500 RPM and torque of 13.6 Nm at 8000 RPM. It offers a 5-speed transmission and has wet clutch plates. It comes with a kick-start technology. The kick-start technology was a bit annoying, showing some issues. It has a compression ratio of 6:6:1. It does not have a sectioned plate, and the throttle response is directly linked to the flow of petrol from the carburettor. It gave one of the best performances in its era because the 2-stroke engine produced more power to its less weight ratio. The piston moves upward and downward in one complete cycle of the power stroke and exhaust stroke in the two-stroke engine that delivers more power. It uses a ram air intake located under the fuel tank that increases power at high speeds, but the high speed also showed some issues. The Yamaha RX115’s handling is not very impressive, the bike’s high speed becomes its enemy, and the bike loses stability at high speed because of its low weight. The handling is excellent when you ride at moderate speeds. The Yamaha RX115’s suspension is stiff, and it gives a smooth performance on rough roads. The braking system is also efficient and applies brakes smoothly. The Yamaha RX115 is considered best for daily commutes and travelling within narrow city streets. The 155 millimeters of ground clearance smoothly takes the bike through bumps and breakers but avoids running at high speeds.

The Yamaha RX115 has a CDI ignition system and comes with a fuel tank capacity of 9.0-liters and an oil capacity of 1.3-liters. The fuel efficiency of RX115 is not impressive, and it gives you a mileage of 35 kilometers per liter. It gives you a top speed of 140 kilometers per hour, but you should avoid running it at this speed for your safety.

The Yamaha RX115 was one of the best-looking bikes of its time, and it was stylish in those times when you had a limited choice when purchasing motorcycles. It has a length of 1950-millimeters, a width of 745-millimeters, and a height of 1035-millimeters. It has beautiful stickers on the fuel tank that make it attractive, and the seat is wide and long for carrying two passengers. It is the reason it was considered a family bike. There is a square-shaped headlight and an attractive instrument panel for your convenience. The seat height is not regarded as efficient, and the riding position is not preferable because of the extra height of handlebars. It has a dry weight of 94 kilograms, and its low weight becomes one of its main problems. The ride’s reliability is not appreciated, and some accidents were reported when riding it rashly. If we talk about the maintenance cost of the bike, then it is high as it is an old technology bike and may show issues when riding. The spare parts of Yamaha bikes are available all over the country.