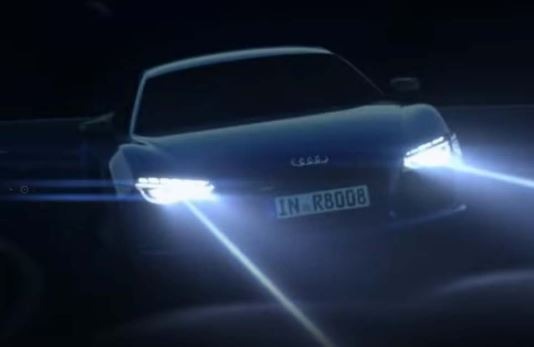 Laser light is an innovation in automotive lighting and the next big step forward since the introduction of halogen, xenon, and LED headlight technologies. The laser light technology tends to open completely new horizon in the design and performance of headlights.

In the future, headlights will be designed to become much smaller and more efficient and elegant with the use of laser light technology.

LED lighting was seemingly the way forward for car lights but now with new vehicles like BMW i8 and Audi R8 LMX, the development of lasers headlights went down on the track. The BMW i8, Audi R8 LMX were launched about the same time and also as the first series production vehicles with laser lights technology. In 2015, the new BMW 7 series also followed, with OSRAM that was involved as the system partner: the laser full beam is based on the developments by OSRAM licht AG lighting manufacturer. As a result of this laser technology, the full beam of this laser light ranges up to 600 meters, double the distance of the present standard LED headlights. So, not only lasers can transmit the information held on CD’S and DVD’s, medication of people’s eyesight and scanning of your shopping at the supermarket but it   can now light your way to home in your car.

Laser diodes are specifically impressive due to their small size. One laser diode generates punciform luminous flux on a few thousandths of a millimeter.

The brightness of today laser’s is already almost four times than that of an LED, It means that the headlight can be made even smaller in the near future without compromising on light intensity.

The primary benefit for driver is that these laser headlights will have the longest range which is provided by any current headlight technology. This will offer the driver to improve visibility, resulting in an increased road traffic safety.

But! Are not the laser light is harmful for eyes? When we directly look at them and wouldn’t the brighter lights just become more danger to drivers & motorists on the road? Here we look at some pros and cons of laser headlights against LED.

How do laser highlights work?

The good news is that this laser light of car doesn’t slice you in half if you look so much at it! The key point here is that if you looking straight at one of the new technology laser lights it doesn’t mean that you looking at actual laser. The way these lights work make safe illumination both for a driver as well as if someone else is looking towards it. This is how they work.

The advantage and disadvantage of laser headlights:

As per study from the BMW car, the laser lights are around 30% more efficient than LED’s and can illuminate up to double the distance around 2000 feet. They use half the power of LED’s which is greater news especially if you are using an electrically powered vehicle. It means less power needs to be drawn from the battery which is always a great thing. The laser light can also be much smaller than traditional bulbs and allowing for more compact and therefore more environmentally friendly packaging.

In operating terms, it seems that the only real disadvantage is that these are not as cheap as LED’s which are still used for the supplying the lower beam energy, Laser light is however expensive but exact figures are difficult to pin point, these are more expensive than LED’s lights which in turn are already three times the price of Xenon light. But in future with advancement in technology there are expectations that the price will surely reduce.

A best way to stand out on the road:

Automotive lighting systems revolutionizing the cars over the past 45 years that was began with the regular tungsten filament bulbs and pioneering their way in the 1970’s  to Halogen gas bulbs that create a brighter  light. In the early 1990’s xenon technology double the light output and introduced with the blue white twinkle. While LED’s are still a relatively new illumination method on luxury vehicles, they approximately double the output of a xenon lighting package which consumes less electricity and last longer that is a requirement for any electric car.

Now, luxury brands like BMW and Audi are vying to incorporate laser headlight technology into their vehicles. BMW has made laser light technology an option on their way of new i8, while Audi has made them available on the special edition R8 LMX. However both of the vehicles can only be optioned with these lights in Europe because of an archaic law in the US. Laser headlights have promised a lighting distance upwards of 1500 feet and the ability to switch from high to low beams, and provide a “spot light” much further out a standard high beam.