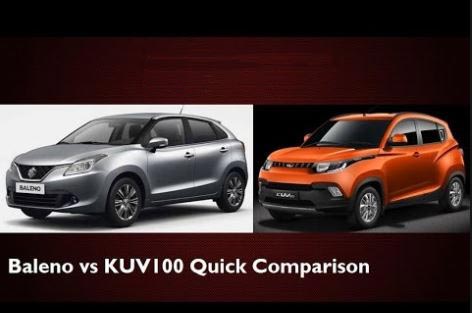 Mahindra has launched its new prototype in India; Mahindra KUV100 NXT. Bookings were started from 18th January with a starting price of 4.39 lacs Indian rupees. It is available in five following variants: K2, K2+, K4+, K6+ and K8 with the price ending up to 7.33 lacs for diesel variant. On the other hand Maruti Suzuki launched its Baleno in the very next week on 28th January with a price starting from 5.45 lacs Indian rupees and ending up to 8.77 lacs Indian rupees for diesel variant. Both of these cars are giving a major competition to each other and there has been a real rivalry situation for both of these companies because both of the cars are giving their best facilities to the customers within a very economic price range. We will compare both of the cars in this article in detail to check features, specifications, pros and cons of both so you can decide which car you should buy.

After enlightening the features of both cars now we will discuss the major differences in both. Starting from engine type both of them have different types with three numbers of cylinders in KUV100 and four numbers of cylinders in Baleno. Mahindra can speed up from zero to hundred kilometers per hour in 14.5 seconds while Baleno can reach the same limit in 12.36 seconds. Thus Baleno can cover more mileage that is 21.4 kilometers per liter than KUV100 whose mileage is 18.15 kilometers per liter. Top speed for both the cars is 180 kilometer per hour. Rear suspension for both the cars differs in types. Wheel size of Baleno (15 inches) is slightly larger than KUV100 (14 inches). Interior theme for KUV100 is grey in color and black doors while Baleno has black and blue interior theme.KUV100 is more spacious than Baleno giving a seating capacity for six persons. Fuel capacity of Baleno is 37 liters that is larger than KUV100 that has a fuel capacity of 35 liters. Baleno is quite different with LED back combination lamp, body colored handles of door, A+b+c pillar blackout. Both cars have body colored bumpers.KUV100 has central control arm rest that is not present in Baleno. It also has gear shift indicator which is not available in Baleno. Baleno has a built in antenna for radio frequency. It has four numbers of speakers making entertainment louder, No parking sensors are available in KUV100. KUV100 has day and night rear view mirror not available in Baleno.

After discussing the best features it provides, we will have a look on some advance features, it lacks. The exterior of the car is not that much angular but curvy giving a muscular and bold European look. Back seats are shorter and are not much spacious making it difficult for long journeys. It lacks touch screen entertainment system. It is lighter in weight that decreases the solidity of the car. Showrooms for the booking are very limited that decreases the number of customers reaching them. Automatic transmission is not available in it.

Design of the car is a bit bold with front being a bit rounded and bumper is inserted inside that can destroy it completely even a slight hit from the back. Wheels are small as compared to its SUV design. Noise, Harshness and vibrations are slightly higher. Roof rails attachment is not firm and it seems it would fall on you. The six seater option will cost you an extra six thousand rupees. Fuel tank capacity is a bit smaller in size and the mileage it is giving gets less. Petrol variant does not give you a pleasant long drive.

On basis of price, people will prefer Mahindra KUV100 but Baleno has many more attractions to be preferred on Mahindra. It gives you good fuel efficiency, good mileage, a larger fuel tank capacity but baleno is longer than Mahindra in dimensions and shorter in height and width which may be disliked by some customers. Comparing from looks Mahindra is more attractive than Baleno so some people will prefer it on the basis of looks but one should select the car by taking into account all the features and specifications rather than just looks and low price. By spending slightly large money you can get more reliable and durable prototype.