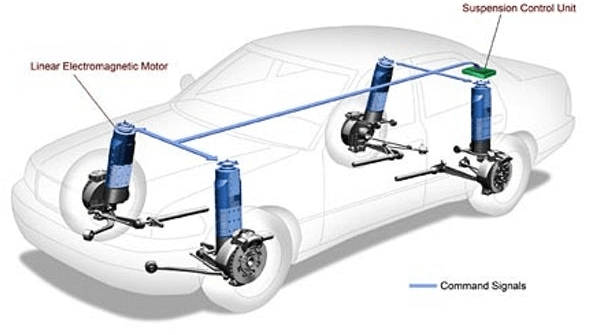 Undoubtedly, it is very easy for someone to understand the idea of the car suspension system. Firstly one has to know what the concept of suspension is. As far as the term of suspension is concerned, it means that you are suspending something from point to the ground. Anything which is suspended it will minimize the impacts of forces on the ground. For instance, if someone is sitting on the ground by laying his back to the wall then obviously he will feel the impact of all the forces while on the other hand if someone is sitting in swinging lift which is suspending at some level from the ground then the force impact will be minimum on that person and air may be able to give him a swing. The above suspension system concept is no doubt oversimplification of what is being done in the car suspension but I have given the most important functions of shocks and suspension of modern car.

As far as the suspension systems of past are concerned these were not as much efficient to absorb the forces of vibration and gravitation. These forces are originated from surface of the road. The rides of people were quite uncomfortable although they had been using padded cushions to minimize the impact of different forces originated from the road. Suspension systems of cars in this modern age are designed in such a way that they absorb greater vibration and have efficient shocks.

As far as the basic construction of a modern car suspension is concerned then there are two principal parts in the suspension system which is spring as well as damping mechanism. It is certainly true that other parts are also there for instance struts, bushings. In the following we will look at the two basic parts of the suspension system of car.

This is the part of the car suspension system which gives a suitable support to the suspension system of car when any additional weight is loaded on it or in case of any sudden irregularity from road’s surface. This is the only part of suspension system due to which car remains at the predefined level from the ground. Now, we are to discuss the types of springs which are of three types and explained briefly in the following.

These types of spring coils are just like ordinary springs that are made up of torsion bar which is tremendously of heavy duty. There is an axis around which this torsion bar is overlapped. On the other hand, the working of this spring tells us that it does the process of compression as well as expansion for the motion of the wheels. It is commonly observed that in the suspension systems of the modern car this coil spring is the mandatory part.

As far as the working of the torsion bar is concerned it is the unique ability of an object due to which it can twist. In it a steel bar is connected at one end which is engaged with vehicle’s frame and on the other end wishbone is connected which is acting as a lever over there. If someone smashes then the upper movement will be transferred to wishbone due to which the torsion bar moves. Due to this very moment, the torsion twists along its axis and in that way it’s spring action can be seen clearly. Most probably, in the fifty’s and sixty’s these were used in the USA.

This is another type of spring in the suspension parts of car which is relying totally on air compressor. In this an air compressor provides power to the spring for its working and that’s why it is known as the air spring. Generally speaking, these springs are found in the passenger buses and cars. Furthermore, due to its higher operational efficiency, people have voted it as a most important component for a quality ride. Air compressions abilities are entirely used in this spring, in order to absorb the vibrations as well as shocks.

It is true that if the stored energy in the springs will not be dissipated in any way then that car would definitely bounce several times unless or until the dampers which are most probably known as the shock absorbers would not play their role. The working of shock absorber or damper is that they absorb the stored energy in the springs and give a controlled and smooth flow to the vehicle. In the following, the three damping mechanisms, for instance, shock absorber, anti sway-bar and suspension struts are discussed in details.

If we talk about the general scenario then it is obvious that the shock absorber minimizes vibration but also reduces the action of suspension spring. This process is merely a conversion of kinetic energy into the thermal energy and hydraulic fluid is helpful for this purpose. As far as the internal structure of the shock absorber is concerned it is just like a pump of oil which is in between wheels and car’s frame while a piston rod is linked with the upper part of shock absorber. This piston rod is in the tube which is filled with the hydraulic fluid. A transfer of energy occurs from wheels towards spring when a vehicle experiences a road bump and this energy is transferred to piston and due to which a piston moves downward. There are some small holes on the piston and as it is filled with hydraulic fluid so due to the experience of road bump, hydraulic fluid comes out from the tube. This fluid comes out from the tube of hydraulic fluid in a smaller manner and reduces the piston movement. Furthermore, it is quite important to know that during the operation of the shock absorber there are two cycles. In the first cycle compression occurs while in the second cycle expansion or extension occurs. During compression, force is exerted on the piston road due to which the piston moves downwards. On the other hand, during extension cycle, the piston is moved upward due to which hydraulic fluid is compressed above the piston. As far as the other important features of the shock absorbers are concerned they are highly sensitive for velocity of suspension. When the velocity of the suspension increases greatly then shock absorbers provide a greatest resistance in response to that. Shock absorbers adjust their self in such a way that they overcome the unwanted motions in a moving car. These unwanted motions may include bounces and jumps etc.

In the above discussion we briefly explained one of the damping mechanisms which were shock absorber. Now it is very important to have a look on another dampening mechanism which is suspension struts. This is just like a shock absorber and its structure tells us that it is placed inside the coil spring and most probably it is a combination of two suspension component in a one. Due to this very important suspension component, the effects of spring forces on the vehicle reduces and it also provides a greater structural aid to the suspension system of car. It is very beneficial for someone to keep in mind that shock absorbers do not provide sufficient support regarding the vehicle’s weight while suspension strut are quite helpful regarding this.

It must be in the knowledge of every one that anti-sway bars are not the essential parts of the suspension system of a car but due to this important component, a vehicle gets an extraordinary stability in its motion. These anti-sway bars are the metallic rods which connect the two opposite suspension systems together by the same axel and are usually used in combination with shock absorbers. When one wheel experienced a movement then that is transferred to other one as well by the help of anti-sway bar and in that way car can move in a very authentic manner. This anti-sway bar also minimizes the shaking condition of the car effectively when it turns around.

The dependant suspension system is that in which the two wheels of the same axle are engaged in a rigid linkage. It is a very strong contact.  Under the working of this system, the force which is acting on one wheel then that force will also have an effect on the opposite wheel as well. The irregularities occurred during the motion of the vehicle on the road will definitely affect both wheels collectively. This type of suspension system is typically used in the heavier vehicles like trucks and buses. The capacity of the shocks in this system has greater capacity as compared to the independent suspension system.

As it is clear from the word semi-dependent which tells us that this suspension system contains the features of both dependent as well as independent suspension system.  Under its working, for instance when a car is moving then both the wheels will move relatively and one wheel may have some effect on the other one. 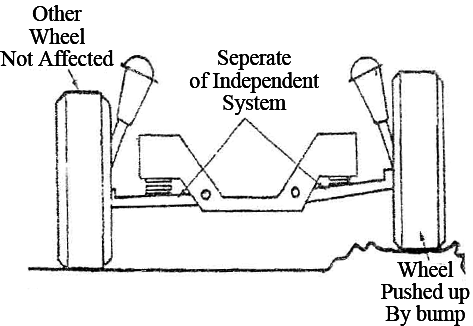 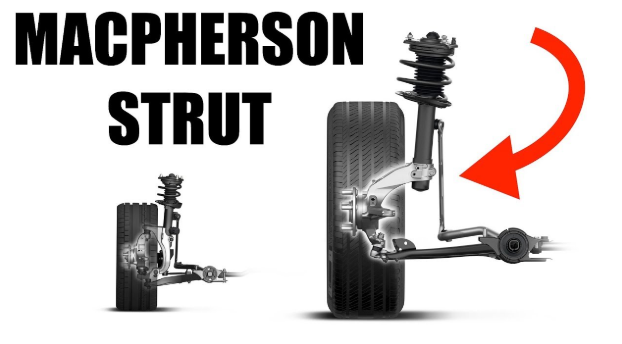 It is one of the most effective independent suspension systems which is used extensively in the European countries. This is also recognized as a front suspension system of a car. As far as the construction of this system is concerned, its functioning is such that it acts as a single cohesive unit and its shock absorbers are constructed inside a coil spring. This system is particularly for the cars having front wheel mechanism. 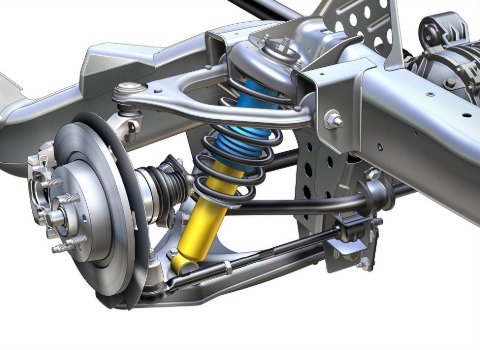 A double wishbone suspension system has a shape of design A-shape due to its uniqueness. It is also recognized as an A-arm suspension. The reason why it is known as double wishbone is that to each wheel there are two wishbones attached. Every wishbone is climbed at two positions; its first position is at a wheel while the second one is at the frame of vehicle. This system also includes shock absorbers and coil springs. These systems are probably used in the large cars and are very help full for the vehicle to reduce their swinging position and provide them a comfortable drive. 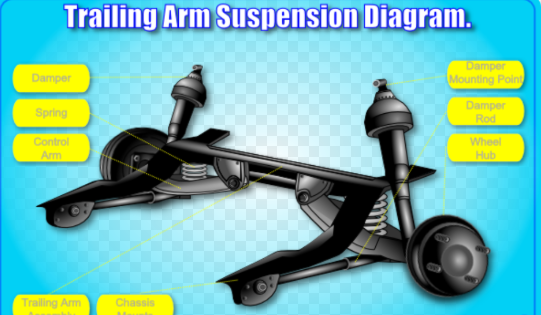 A trailing suspension is identical to wishbone suspension up to some extent but the main difference is that its suspension arms are shaped in such a way that they are connected directly to the chassis. The movement of these arms is parallel to chassis and it’s a quite older system.

HOW MUCH MONEY IS REQUIRED TO REPLACE CAR SUSPENSION SYSTEM? 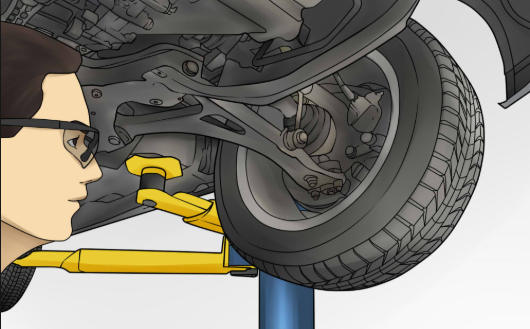 It is quite clear that maintenance of the suspension system of one’s car is one of the most important things for driving it safely. There are many precautionary measures that can be taken for the best working of one’s vehicle suspension system.

It is in the knowledge of every one that the automotive engineers are making developments day by day for the betterment of suspension systems of automobile vehicles. Some of the most important technological advancements are briefly explained in the following.

It is that technology of the new suspension system that works in collaboration with the magnetic fluid and that fluid is recognized as the magneto-rheological fluid. Under this technological change the suspension system boosts in such a way that the vehicle’s movement adjust itself with the road in milliseconds and it is quite impressive. As we know that conventionally hydraulic fluid is used in the shocks absorber but under this technology change synthetic hydrocarbon oil is mixed up with miniature magnetic particles. This is a highly quick response system for the vehicle.