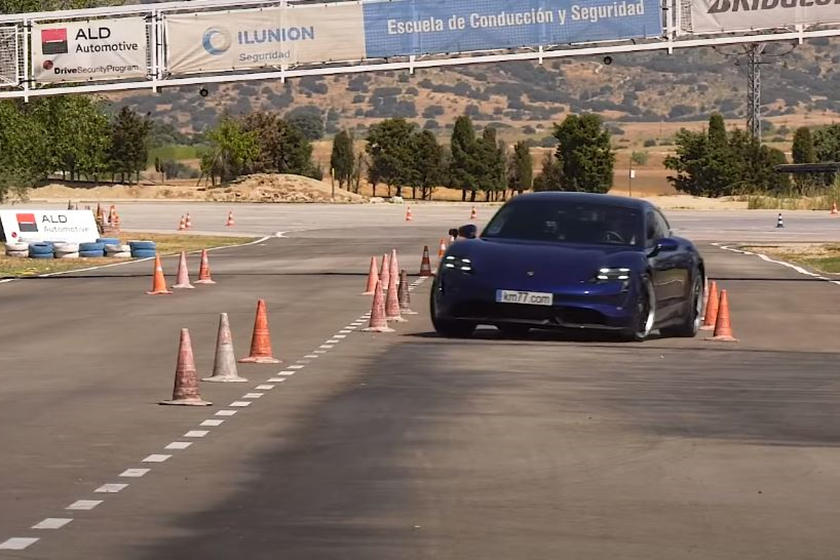 There is no doubt that Porsche Taycan is among the most qualitative competitors of Tesla’s cars and also the best performance oriented and handling vehicle as compared to other electric’s. Porsche have the experience of years with gasoline engine cars and also known for the vehicles those give great driving experience but due to shift to electric cars Porsche was bound to make a move where it come up with Taycan that is a super cool car and was the direct answer to Tesla, This is why Taycan is being tested against Model 3 of Tesla to know the capabilities and differences among both the cars.

For Testing the Taycan there has been conducted the Moose Test “Moose Test is the way of testing the vehicle in which it is observed if what happens to the particular vehicle when it turn sharply to avoid un-expected obstacle in the middle of road?” as the Taycan has passed the Test but didn’t able to Break the Record of Tesla which was made by Model 3 Last year with the speed of 83 Kilometers per hour.

The test was conducted by km77.com for which they took the top variant of Taycan which is Turbo S. For passing the test it is required for the vehicle to quickly swerve and avoid the obstacle without hitting and in the test Cones were being used as obstacles, as the Taycan pass the Moose test but it took various attempts to clear the test and with consideration of weight there is no doubt that Taycan has performed much better whereas the Top Variant Turbo S of Taycan clear the test in sport plus mode with the speed of 78km/h which is 5 km/h less than Tesla model 3.

What Creates the Difference between Taycan & Tesla model 3:

The major difference was because of the Tesla’s regenerative braking system that allows the vehicle to be easily controlled during turns.

If we compare the Model 3 and Porsche Taycan performance than it could be easily  observed and said that even Taycan is the Qualitative vehicle and with Turbo S Most expensive variant  not able to beat Tesla Model 3 While the Model 3 is the 1/3 of Taycan’s Turbo S price, so un arguably Tesla model 3 has beaten the Taycan.