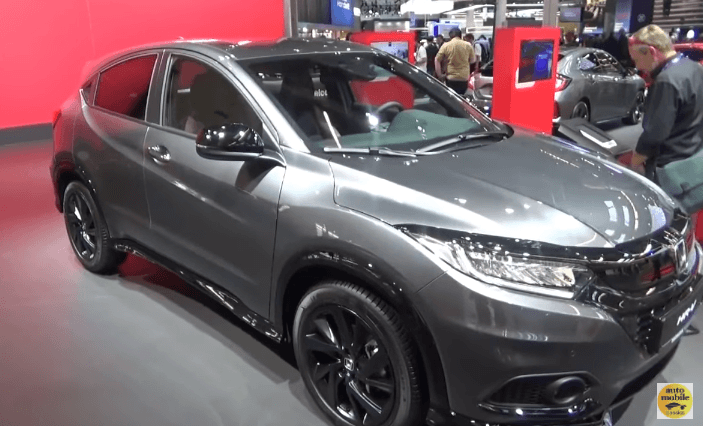 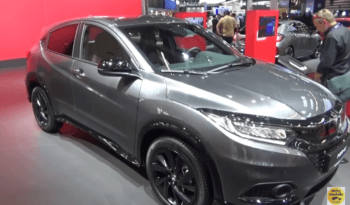 Honda Vezel made its debut in 2013 in Japanese markets and made its way to other countries like Sri Lanka, Canada, Australia, North America, and Pakistan with HR-V nameplate in 2014 and now Honda has released the 2020 version of HR-V with a sleek and versatile facelift which gives an eye-catching view of this car on roads. This model has been rated on number three among small SUVs by getting 7.6 stars out of ten because of its wonderful driving performance, full comfort on roads, latest infotainment and automation, and above-average cargo area along with excellent fuel economy. It is offered in 5 variants including LX, Sport, EX, EX-L, and Touring trim in which all the trims have similar powertrain and offer an all-wheel driving facility while LX is the base trim. Sport trim is upgraded with eighteen inches alloy wheels and both Apple Car Play and Android Auto interface. EX trim differs from others as it features heated front seats and a power moon roof. EX-L trim has leather upholstery that makes it different and more luxurious than other trims and the Touring trim is the top-of-the-line trim which is equipped with an 8-way power-adjustable driver’s seat, navigation system, and all-wheel driving feature as standard.

All trims are powered by 1.8 liters 1799 cc 1800 sixteen valve SOHC four-cylinder engine generating horsepower of 141 hp at 6500 rpm and 127 lb-ft torque at 4300 rpm. Its suspension is well-tuned making the handling of the car well even on curvy roads by keeping the body rolling to a minimum and letting you maintain your balance even when the pathway is very rough and bumpy. This SUV accelerates to sixty miles per hour in 10.4 seconds. The performance of HR-V is marvellous but speeding up the car is not really comfortable as the raucous noise from the engine makes the ride disturbing that’s why its acceleration is not very charming but once you are speeded up the comfort in the cabin is well enough to provide you comfortable road trip. It guarantees a good fuel economy by providing a mileage of twenty miles per gallon in the city and thirty-four miles per gallon on highways.

Honda Vezel 2020 is slightly redesigned with a glossy black honeycomb chrome-accented grille on the front and the LED halogen headlights on the front are featured with automatically adjustable projector beams. Seventeen inches aluminum alloy wheels are designed with two black tones that complete the classic outfit of the vehicle letting your eyes glued to this supercar. LED headlights are also provided with daytime running lights improving your visibility on roads and the fog lights makes the journey safe even when visibility on roads is very limited. The exterior is also equipped with rain-sensing windshield wipers automatically activating itself when it rains and the sunroof is power controlled letting the wind blow inside the cabin and enlightening the cabin. Rear-end is unchanged with a similar design as the previous model but it features grey tail lights enhancing aesthetic on the rear end providing more visibility to drivers.

The Interior cabin of the Honda Vezel is good-looking with slightly few flaws. The overall design is elegant having a deluxe cockpit with simple lines imparted on it and a wing-shaped panel holding instrumental cluster for driver’s aids while the central console is heightened a bit but the air vents are smaller in size than previous models.

Seven inches touch screen infotainment display is mounted on the central console and the size of the touch screen differs in executive trims. It is highly rated as compared to other SUVs because it provides more utility and comfort to passengers with larger legroom for front and rear passengers and better-cushioned seats making your journeys more luxurious and comfortable. IIHS has marked it a Top Safety Pick because it is equipped with a collision mitigation braking system, road departure mitigation system, adaptive cruise control, lane-keeping assistance system, multi-angle rearview camera, and airbags.