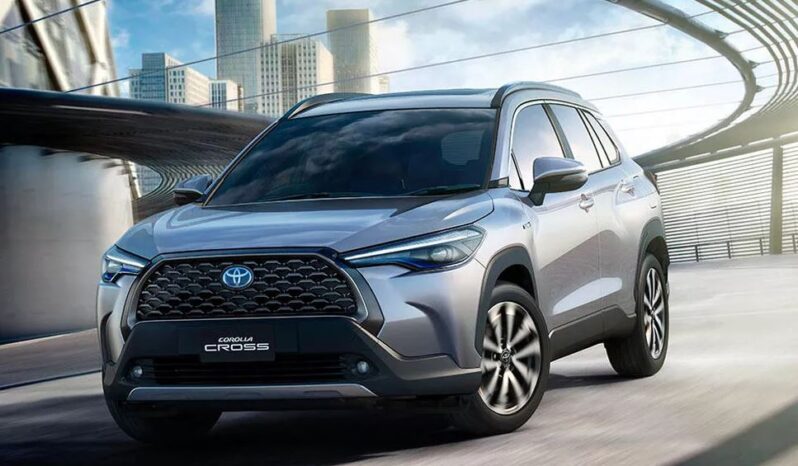 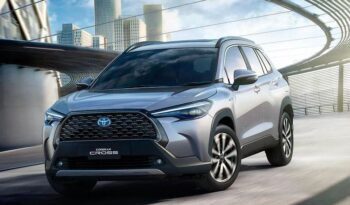 Toyota Corolla Cross is available in two engine options that include one hybrid powertrain. Initially, only CBU units of Cross will be available in Pakistan but maybe after some time, CKD units will also be available for sale by Toyota Indus Motors but there is no confirmed timeline for that yet.

Three trims or Versions of the Toyota Corolla Cross are available in Pakistan all of these are hybrid variants. The gasoline variant (N/A in Pakistan)t has a standard and naturally aspirated petrol engine, while on the other hand, the hybrid variant (A/V in Pakistan) comes with an AC synchronous electric motor. All the variants offer front-wheel drive feature only, and the transmission option for both trims is also similar to that is a seven-speed continuously-varying automatic transmission.

There are so many differences between the three versions of the Toyota Corolla Cross which can be seen in the Specs & features Section while some Major Differences have been given here;

The all-new Toyota Corolla Cross will deliver you superb maneuverability with an elevated driving position that not only gives a wide-view field to the drivers but also assists in minimizing blind spots. You will be enjoying responsive handling with its minimum turning radius of 5.2 meters. The optimized suspension geometry of the Toyota Corolla Cross is efficient enough to give you a balanced ride quality along with its soft bushings that compliments a comfortable ride for the passengers. All three trims of the Toyota Corolla Cross are mated with a seven-speed continuously-varying automatic transmission that comes with smooth throttle changes and the engine delivers enough power to deliver efficient front-wheel driving. Toyota corolla Cross is introduced with a lighter weight that helps to achieve excellent fuel efficiency. The hybrid variant consumes 4.3 liters of petrol to deliver a mileage of hundred kilometers (23 Kilometers per Liter), and the gasoline-powered variant in Thailand consumes petrol of 6.5 liters giving a mileage of hundred kilometers (15 Kilometers Per liter). The carbon dioxide emissions values provided by the New European Driving Cycle are 150 grams per kilometer by the gasoline variant, and the hybrid variant emits 98 grams of carbon dioxide per kilometer. The brakes of Cross are also easy to modulate, and they let you apply the brakes smoothly, giving extra confidence to the drivers. Driver gains more confidence in their driving with the presence of Toyota Safety features that aids the safety and makes the drive more fun. The engine does not make many noises that make your ride even more comfortable, even at high speeds on highways. The NVH insulation is even more enhanced in hybrid powertrains in which the electric motor is quieter. The steering wheel of Cross is also lighter in weight, and it gives the drivers enough confidence to drive it through narrow roads and high traffic situations.

The exterior design of the Toyota Corolla Cross looks similar to a sedan that features a rounded edges headlight on the front accompanied by the central black colored frame grille that looks stunning from all angles. The LED headlights are provided with daytime running lights along with fog lights. The rear end features thin taillights and a beautiful bumper that is covered in black cladding and faux skid plates. Fifteen inches alloy wheels look beautiful, and the hybrid trim comes with seventeen inches alloy wheels that look even more beautiful. The exterior design of Cross resembles CH-R, and it imposes a stunning fascia to attract customers from all areas.

The interior end of the Toyota Corolla Cross features a large space for accommodating five adults comfortably. The large spacious openings for door makes the entry and exit from the vehicles easy, and the increased headroom provides easy access to the luggage space, which accounts for a total of 487 liters. The dashboard of the Toyota Cross is similar to the regular Corolla, and the central console is upright giving it a classy look. Eight inches touch screen display (Premium) & basic with CD/BT mounted on the dashboard for infotainment. Some of the best features the cabin is equipped with include power front seats, dual-zone climate control feature (premium only), and 360-degree parking camera, Toyota Safety features (ABS, EBD, VSC, & BA)system, and airbags for safety.

Toyota Corolla Cross is equipped with many safety features but the Toyota Safety Sense facility (N/A in Pakistan) which is a standard feature in other countries that makes the drive safer. Some of the standard safety features it provides are Anti-lock Braking System,  Electric Brake-force Distribution,  Brake Assist,  Vehicle Stability Control, clearance and back sonar, and cruise control (Premium only), with front airbags.

Toyota Corolla Cross price is high as compared to other vehicles of the same class present in Pakistan, but if you are looking for a car that has a similar design language like Corolla Altis hybrid sedan and offers more ground clearance as well as the exceptional driving experience than Toyota Corolla Cross could be your next. As the Price of the Toyota Corolla Cross is very high it should have all the features present in international variants like Toyota Sense, Apple Car Play, and a 360-degree camera view.