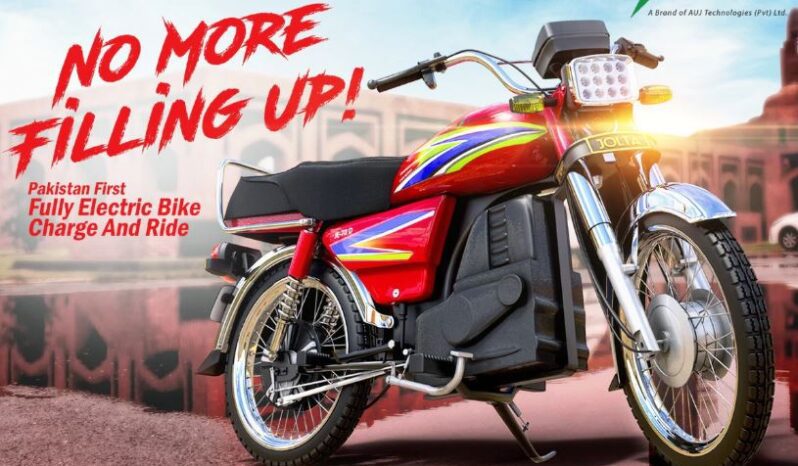 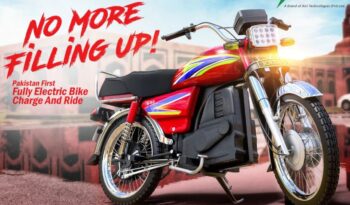 Jolta is the first electric vehicle company of Pakistan that aims to electrify the automobile industry in Pakistan. It has launched several electric bikes to promote a green environment, and the Government is also supporting it by giving incentives. The Jolta E-70D was the first electric bike by the company, and now four new electric bikes are also introduced that include JE-70D Special Edition, JE-70L, JE-125L JE Sports bike, and JE-Scooty. All these two-wheelers are locally-assembled in Pakistan, and when we talk about the Jolta JE-70D, we must say it is superior to other traditional bikes. It comes with 5-dry batteries, and each battery delivers 1000 Watts the life span of these batteries is almost 1.5 years. One of the best things about it is pollution-free, noise-free and budget-friendly in this period of increased petrol rate. The Jolta JE-70D’s design is similar to the other traditional bikes, and it differs from them only in powertrain, so its spare parts are also the same as the other bikes. So the spare parts are available all over the country, and when the battery is dysfunctional, you can replace the battery with the new one. The running and maintenance cost of the bike is not high that appeals to customers to buy it, and Government is also supporting the sales of electric vehicles in the country. The Jolta JE-70D comes with a 3-month guarantee period. It delivers an efficient and safe performance. It has water-resistant batteries and a motor, so the bike is safe to ride in the rain, the battery cabin is made from fiber, and you can switch off the electric supply by a breaker safely. There is a variant of Jolta JE-70D called JE-70D Special Edition, and the only difference between them is the speed the Special Edition gives an extra 10 kilometer per hour speed compared to the Jolta JE-70D. It can go 60 kilometers per hour.

The Jolta JE-70D gets its power from 5 dry batteries, each having a battery power of 20AH. The electric motor generates 1000 watts of power, and the battery cabin is made up of fiber that makes it safe for traveling. There is no tension between refueling your tank daily and going to the petrol pumps for refueling. You can conveniently charge your bikes at home, and overnight takes to charge the batteries fully. It uses around 1.5 units of electricity to charge the batteries fully, and once charged utterly, the bike can cover a distance of 80 kilometers. The durability of each battery used in the bike is for 1.5 years, and you will have to replace the batteries after 1.5 years, depending on their condition. Although you will have to change the batteries after a certain period, it is still better than buying petrol daily. The new battery can cost around 3000 to 4000 Pakistani rupees, and it’s not bad. The overall performance is good and comes with electric-start technology that switches the bike quickly with the press of a button. The suspension system is well-tuned and delivers a smooth ride, and the braking system is also efficient in applying smooth brakes. It is a perfect choice for daily commutes, takes you through narrow streets and rough roads of our country.

The Jolta JE-70D is similar to other traditional bikes except for the batteries that are placed in the place of the engine’s position. It comes with beautiful stickers added to the fuel tank and other parts. The front end has a square-shaped headlight that provides enough light to brighten your dark roads, and the taillight design is also traditional. The handlebar design is also typical, and an instrument panel is placed in the front, showing speed and battery charging. The seat is long and wide, so you can carry 1 to 2 passengers, making it a family bike. The seat height is enough so the rider can place his feet on the road when waiting at the signals, and the seat is comfortable for riding. The wheel design is also similar to other 70cc bikes, and the tires are of good quality, giving a good grip on the roads. The Jolta JE-70D is a safe bike to ride, and its build quality is good, made up of water-resistant batteries that make it safe to ride in rainfalls.