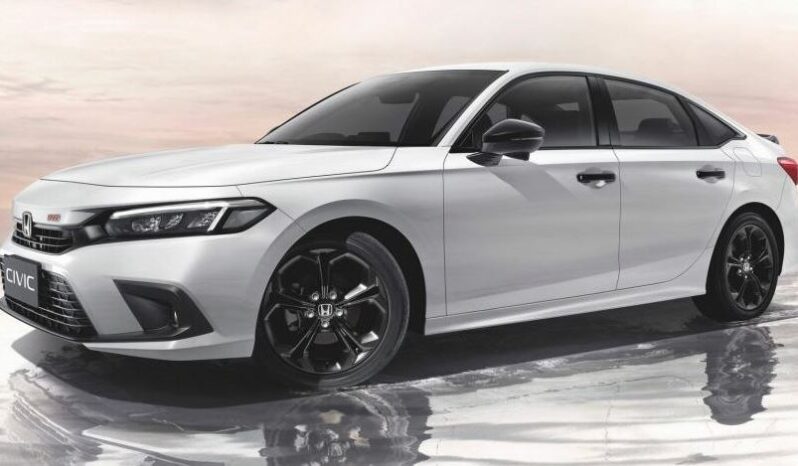 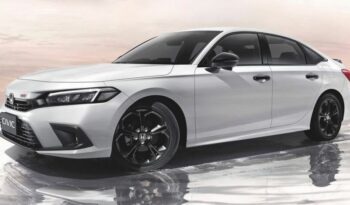 The Honda Civic 11th generation in Pakistan is powered by a 1.5-liter turbocharged engine that generates a maximum of 127 horsepower and 180 nm of torque in Base & oriel Models, while the RS Model of Honda Civic generates 176 Horsepower with 220 nm of torque. All the Variants have Continuous Variable Transmission as standard while Honda Differentiate Transmissions by calling M-CVT in the standard model and LL-CVT in Oriel and RS models.  It comes with a Macpherson strut front suspension and multi-link suspension at the rear.

The 11th generation Honda Civic gives an efficient ride with its powerful engine that delivers a forceful response, whether accelerating from a stop or surpassing at speed of 180. The sport-tuned suspension makes every corner exciting and keeps the ride quality smooth so that it will be best suited for our country’s roads and the bumps and breakers in the streets do not affect the quality of the ride. The continuously varying transmission gives an agile response to your pedal actions. The paddle shifters are mounted on the steering wheel in the RS version and do not require extra power in up-shifting and downshifting. It offers 3-driving modes: normal mode, Eco mode, and sport mode, you can choose the driving mode of your requirement at the push of a button. The ride quality is stable and sporty. It takes 7.9 seconds to accelerate from 0 to 60 miles per hour.

On the whole, Honda Civic is effortless to drive, but its tires make a little bit of noise, while the grip is firm. The fuel economy of the Honda Civic is not bad. The higher-end trims get an estimated combined mileage of 34 miles per gallon. It offers a navigation system that uses offline maps, so you can find your way without using cell phones. The road departure mitigation system lets you cross the detected lanes without signaling and provides steering assistance.

The styling of the new Honda Civic is sleek with a lower and broader frame. The front has new dual-low beam LED headlights with a black grille in Top of the Line RS variants while Base and Oriel get Halogen Headlamps. The fastback-inspired roofline has an elongated hood, and clean body lines run all along the body and cast a sporty silhouette, in the RS model there have been given black painted door mirrors, door handles antenna and spoiler. There is an RS emblem at the front and back. The LED tail lamps are also redesigned to create a dramatic effect with the latest technology, and the chrome exhaust finisher gives sporty character to the car. The new Honda Civic comes with 17-inches alloy wheels in RS & 16-inch and Oriel and Base models that add a touch of attitude.

The inside of the 11th generation Honda Civic is stylish, and the cockpit is designed to make your drive thrilling with wide-open sightlines. The cabin is spacious enough to accommodate five adults and has leather-covered seats (oriel & RS) that look stylish and provide maximum comfort, (Fabric in Base). The driver’s seat comes with a 4-way power adjustment and has a lower cushion that easily tilts up and down. The American model also offers heating technology in the front seats for extreme weather conditions. The higher-end trims come with a one-touch moonroof that opens and closes with a single touch and adds light and fresh air to the cabin. The dual-zone climate control system (Orield, RS) adjusts the temperature inside the cabin perfectly (single-Zone: Base). The rear seats come with a split-fold option that increases the cargo room. There is a 7-inches (Base) 9-inch (oriel, RS) Android touch screen mounted on the dashboard that gives infotainment and comes with Smartphone connectivity. The higher-end trims offer 8-speaker Boss Premium audio system and a front USB port with an additional higher trim. The Blind Honda Sensing system (RS only) detects and alters your vehicle to the presence of others. At the same time, the multi-angle rearview camera gives a better view of the road and surrounding on the display screen. 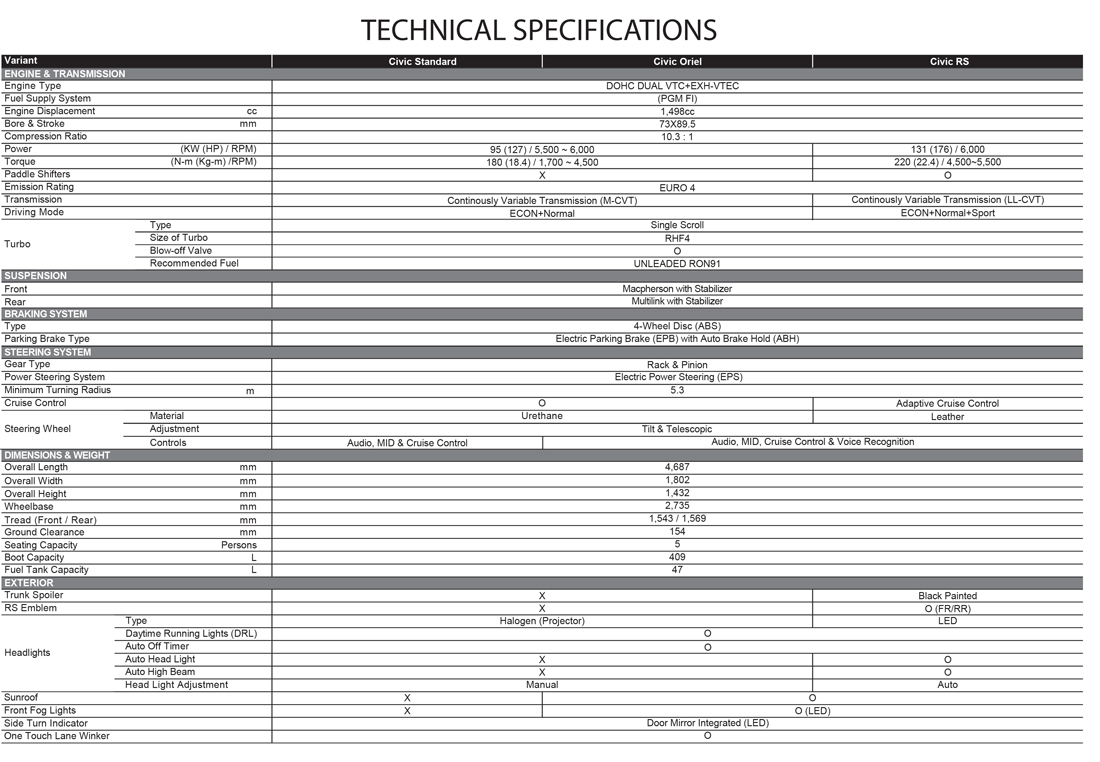 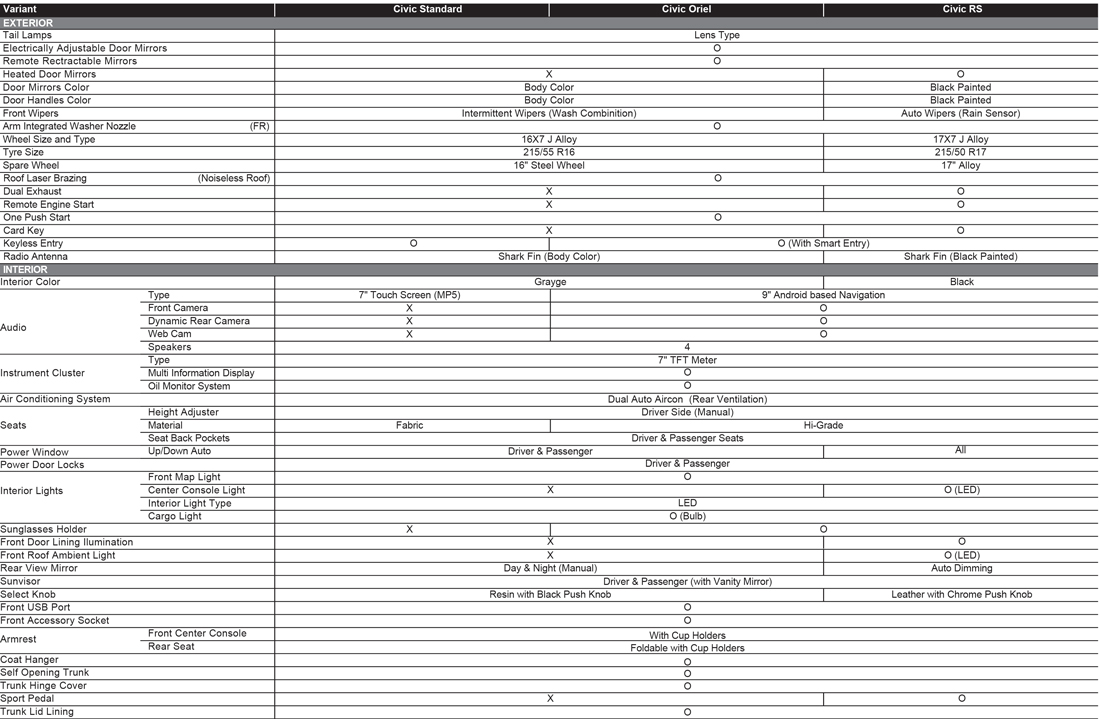