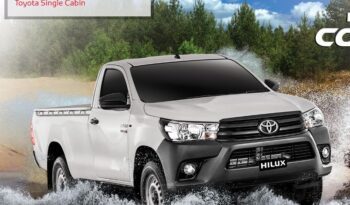 The eighth generation of Toyota Hilux was launched in 2015 and had some new features like Autonomous Emergency Braking, upgraded AC vents, and LED daytime running lights. The Toyota Hilux is also available in single cabin option, which offers single cabin instead of double. This version of the Toyota Hilux offers a similar engine and power as the regular Hilux. It is available in the front-wheel-drive option and four-wheel-drive option. The single cabin Toyota Hilux is available in different versions, and its detail will be discussed further in this article. The 2021 Toyota Hilux Single Cabin comes with all the latest features and offers a good driving experience. It has a versatile cabin and is used for carrying heavy loads to the destination. It has a customizable flat deck according to your requirement. You can use it to transport heavy loads or transport food into a refrigerator van, or be used by security companies. It offers a manual transmission and offers both diesel and petrol engines. The four-wheel-drive option lets you carry heavy loads to places where regular vehicles can’t go, and you can drive over extreme road conditions conveniently even when a heavy load is loaded in its deck.

The 2021 Toyota Hilux Single Cabin is available in 5 variants that are as follows:

The petrol version offers the petrol engine while the transmission of all the versions will be a five-speed manual transmission. The 4×4 Toyota Hilux Single Cabin gets its power from a 1 GD-FTV, 2755 cc, 4-cylinders, and INLINE engine that generates a maximum 130 kW (170 HP) of power at 3400 RPM and torque of 420 Nm at 1400 RPM to 2600 RPM.

All the Toyota Hilux Single Cabin engine options deliver enough power to give an efficient ride quality. The engine generates enough ability to run all four wheels efficiently and lets you carry heavy loads through rough terrains easily. The double-wishbone suspension at the front and leaf spring rigid axle on the rear axle gives you a well-tuned suspension that lets you drive over bumps and uneven surfaces smoothly without producing any jerk. The ventilated disc type brakes on the front and leading-trailing drum brakes at the rear make the braking system efficient. The 5 or 6-speed manual transmission comes with precise gear changes that shift gears conveniently, delivering you an overall smooth ride. The hydraulic power steering controls the vehicle efficiently with fewer efforts required by the driver. You can turn the car smoothly without giving anybody lean, and the heavy load loaded in it does not affect the quality of the ride. You can carry from 1250 kilograms of cargo to around 1300 kilograms of freight in the load bay of a single cabin Hilux while it has a towing capacity of about 3.5 tonnes. Toyota Single Cabin offers you a mileage of 8 to 9 kilometers per liter and has a fuel tank capacity of 80 liters. The fuel average of the Toyota Hilux Single Cabin is reasonable when considering it a good carrying vehicle that will require more power and energy. It gives you a maximum speed of 200 kilometers per hour which is not bad for a heavy car.

The 2021 Toyota Hilux Single Cabin is 5265 millimeters in length, 1800 millimeters in width, and 1795 millimeters in height. It has a bold stance at the front end with its 3-dimensional vertical black grille in the center that has Toyota’s logo encrypted in it and two sleekly designed Bi-LED headlights sweep on both sides of it. LED foglights are also given beneath the LED headlamps that assist in extreme weather conditions. The rear end has an extended load bay with 2315 millimeters in length, 1645 millimeters in width, and 480 millimeters in height. It is spacious enough to carry around 1250 kilograms of load, and the load bay comes with a tailgate that opens and closes quickly manually. The rear end has two prominent box-shaped LED taillights, and mudguards are given on the front and rear. The door handles are colored black which looks decent. The alloy wheels in Toyota Single Cabin is 17 inches large, and it gives bold and sporty looks to the overall design of Single Cabin.

The inside of the Toyota Hilux Single Cabin is elegant and straightforward, with two seats in the cabin accommodating one drive and the other front passenger. The seats are covered with fabric, while a black-colored theme is given to the cabin with black door trims, black door handles, and black-colored seats. The cabin is comfortable enough to provide a comfortable ride to the driver for longer route journeys, so he cannot get tired so often after delivering goods to the destination. An entertainment system is also given in the cabin to entertain the driver and the passenger. He will get an AUDIO READY infotainment system and 2-speakers to enjoy the music of their choice. An efficient air conditioning system is also given in the cabin so the driver can transport goods in hot weather comfortably. 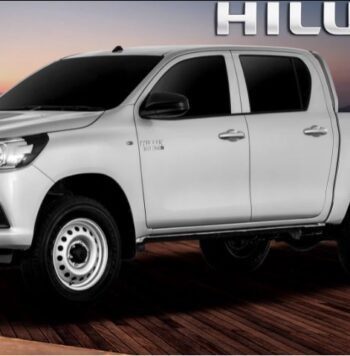